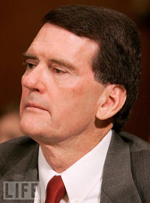 A 22-year-old man named Jared Loughner has been arrested for attacking a group of people outside an Arizona grocery store with a firearm. Wounded in the attack was Arizona Representative Gabrielle Gifford and killed in the attack was Federal Judge John Roll. A 9-year-old girl was also killed in the nearly one dozen victims. Five deaths are being reported. (Judge Roll bio, pictured right)

Congresswoman Giffords is being reported as having survived with prospects for recovery good.

The killer is one prime nut. According to Loughner’s YouTube channel his favorite books are:

I had favorite books: Animal Farm, Brave New World, The Wizard Of OZ, Aesop Fables, The Odyssey, Alice Adventures Into Wonderland, Fahrenheit 451, Peter Pan, To Kill A Mockingbird, We The Living, Phantom Toll Booth, One Flew Over The Cuckoo’s Nest, Pulp,Through The Looking Glass, The Communist Manifesto, Siddhartha, The Old Man And The Sea, Gulliver’s Travels, Mein Kampf, The Republic, and Meno.

Laughner has a YouTube video he titled “Hello” in which he lays out some of his insanity. This lunatic talks about a “new currency,” says he is a “conscience dreamer,” and complains of illiteracy in “English grammar” in those around him. Reading his rambling proves he has no clue about that latter himself. Apparently Loughner considered himself some sort of expert in “mind control.”

The video is all text and reads…

This video is my introduction to you! My favorite activity is conscience dreaming: the greatest inspiration for my political business information. Some of you don’t dream – sadly.

Thirdly, I know who’s listening; Government Officials, and the People. Nearly all the people, who don’t know this accurate information of a new currency, aren’t aware of mind control and brainwashing methods. If I have my civil rights, then this message wouldn’t have happen.

In conclusion, my ambition — is for informing literate dreamers about a new currency, in a few days, you know I’m conscience dreaming! Thanks you!

Until YouTube pulls it down, here is the video:

Laughner’s now removed MySpace page listed some of his schooling.

Interests: My favorite interest was reading, and I studied grammar. Conscience dreams were a great study in college!

Music: Pass me the strings!

In another video Loughner claims to be a military recruit at MEPS in Phoenix and is upset that mini Bibles are being given to recruits. The Army has since reported that Loughner was rejected in 2008.

He goes on to say:

In conclusion, reading the second United States Constitution, I can’t trust the government because of the ratifications: The government is implying mind control and brainwash 0n the people by controlling grammar.

No! I won’t pay debt with a currency that’s not backed by gold and silver!

This man is obviously an anti-Christian, anti-government, conspiracy nut.