The Nonprofiteer rarely publishes the work of anyone else, but if ever there was a case for an exception it’s this post about the low pay at nonprofits.  ProgChik drills down into the f***ed-up world of nonprofit compensation (or nonprofit noncompensation, as the case may be).  Many thanks to the author for permitting me to re-post her fine work, of which you can see more here.

So it is obvious that if a man is to redeem his spiritual and moral ‘lag,’ he must go all out to bridge the social and economic gulf between the ‘haves’ and ‘have not’s’ of the world. Poverty is one of the most urgent items on the agenda of modern life.

March 1st is The Big Share in Wisconsin, an event meant to motivate the community to donate money to 70 nonprofits that are “dedicated to building a fair, just community” and “[making] the world a better place.”

My friend, let’s call her Kim, works for one of these organizations. One that, among its other social justice initiatives, is dedicated to creating the ” … Social change necessary to end sexual violence.”

This is a lofty and worthwhile mission statement, but let’s explore how inextricably linked social justice is with economic justice. This is assuming that those in the nonprofit/social justice community aspire to end injustice of all kinds–not focus on one while furthering another.

According to the Center for Economic and Social Justice:

Social justice encompasses economic justice. … Social institutions, when justly organized, provide us with access to what is good for the person … . Social justice also imposes on each of us a personal responsibility to work with others to design and continually perfect our institutions as tools for personal and social development.

OK, and how do we define economic justice?

The ultimate purpose of economic justice is to free each person to engage creatively in the unlimited work beyond economics, that of the mind and the spirit. … [It] describes how one makes “input” to the economic process in order to make a living. It requires … equality of opportunity to engage in productive work. … This principle is violated by unjust barriers to participation, by monopolies or by some using their property to harm or exploit others.

Not surprisingly, there is a link between poverty and the most extreme form of exploitation: slavery. The poorer a country is, the more vulnerable its inhabitants are to enslavement, both sexual and otherwise. Haiti, the poorest country in the Western Hemisphere, has the third highest proportion of slaves worldwide. There is also a connection between wealth inequality in a country and how exploited its citizens are: Qatar is one of the world’s wealthiest countries, though the richest receive over 13 times what the poorest do. It also has one of the highest slavery rates.

It’s nothing new that workers are exploited both legally and illegally in the U.S. Barbara Ehrenreich’s book, Nickel and Dimed, published in 2001, is often required reading in high school and college classes. The gist is that a full-time worker can’t survive on one minimum-wage job in America. Today, if a person worked 40 hours/week without cease at minimum wage, she would make $13,920 a year gross income. Paying rent, buying health insurance, paying for transportation, and raising children isn’t feasible on such a low salary, though millions are expected to survive on it.

The Fight for Fifteen movement brought us a number that we could apply to jobs across the U.S. While cost of living  and employee benefits vary, $15/hour full-time–$28,500/year–is a good baseline. At this wage, the lowest paid workers won’t have to live with the threat of poverty looming on the horizon or the need to make unsavory choices, such as avoiding a doctor’s visit in order to pay an electricity bill.

Remember: social justice encompasses economic justice. How can someone who is struggling to meet her own basic tiers of needs afford–either with money or with mental energy–to help others?

From the United Nation’s Universal Declaration of Human Rights:

Article 23: (1) Everyone has the right to work, to free choice of employment, to just and favourable conditions of work and to protection against unemployment.

(2) Everyone, without any discrimination, has the right to equal pay for equal work.

(3) Everyone who works has the right to just and favourable remuneration ensuring for himself and his family an existence worthy of human dignity, and supplemented, if necessary, by other means of social protection. …

… Article 24: Everyone has the right to rest and leisure,including reasonable limitation of working hours and periodic holidays with pay.

Article 25: (1) Everyone has the right to a standard of living adequate for the health and well-being of himself and of his family, including food, clothing, housing and medical care and necessary social services, and the right to security in the event of unemployment, sickness, disability, widowhood, old age or other lack of livelihood in circumstances beyond his control. …

This brings me back to Kim. She was placed in a part-time position at the nonprofit through a temp agency after indicating she was seeking full-time work. She was told the organization would have full-time positions opening up, and, after her three-month temp contract, she would be considered for one.

Currently, Kim makes $12/hour, is contracted to work 20-25 hours/week, and is offered no benefits, including health insurance, paid holidays, or sick leave. She works another part-time job on the weekend, and, assuming she never takes a day off and the office stays open year-round, she’ll gross $16,000 this year.

After three months, the nonprofit’s director informed Kim that the temp agency contract was in fact six months long, and that she shouldn’t expect a full-time position–or even a permanent one. In the meantime, two unpaid interns and four new staff members had been hired. Staff are paid good salaries with a full range of benefits. Kim–though she has a background and education commensurate with the staff and has been with the nonprofit longer than many–is the only paid worker not acknowledged on the website or given any paid leave or health insurance.

The paragraph below from one of the nonprofit’s many grants doesn’t seem to apply to Kim or the unpaid interns: 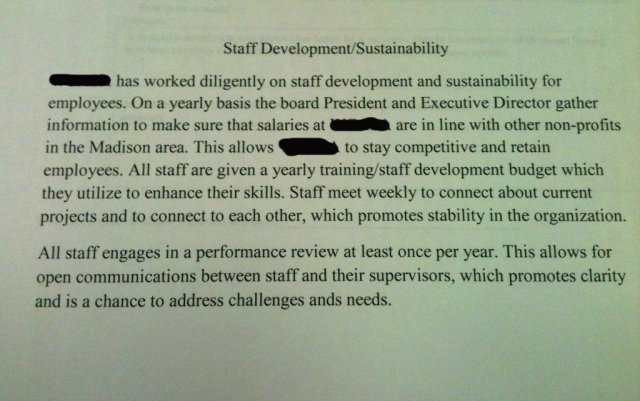 The two positions with the most authority at the nonprofit are filled by social workers. This profession is held to a high standard of social justice–possibly the highest of any profession. The National Association of Social Workers advises:

… social workers have been involved in “connecting the dots” between peace and social justice. According to social work philosophy … Peace is not possible where there are gross inequalities of money and power, whether between workers and managers, nations and nations or men and women.

Though economic justice is listed on the nonprofit’s website as a current “monitored public policy agenda issue,” this issue isn’t addressed within the organization. The lowest paid staff member makes about three times what Kim does in a year, while the director makes five times what Kim earns. The interns, obviously, work for nothing. This isn’t to say that the staff’s salaries are unwarranted, but this doesn’t obviate the fact that all employees deserve benefits and a living wage.

While it’s reductive to assume that all nonprofits are “good” and all for-profits are “bad,” the organization where Kim works is well-respected in the community and considered by many, including current employees and the organizers of The Big Share, to do “good work.” Surely the organization does beneficial things, but is work worthy of the term “social justice” if its approach brings us two steps forward and one step back?

The next time you donate money, ask one question: will this organization truly further social justice work both without and within?

Reprinted by permission from http://progchik.com/