It’s kind of a marathon for me, keeping up with at least a few selected CCBW events, preferring local brews and hard-to-find tappings. Maybe I’ll even get to one of these. I suppose we’ll put these highlights first: a chance to party at a Cubs game with no Bud Light in sight:

12:20 – 4:00 pm ♦ CCBW in the Sky
Skybox on Sheffield, 3627 N Sheffield Ave., Chicago
Goose Island Catering and Skybox on Sheffield are amping up the winning combination of craft beer and baseball for a Chicago Craft Beer Week celebration! Cheer on your Cubbies while exploring your palate with three levels of a dozen refreshing, hoppy, and reserve Goose Island beers.
Malty Beers:

All drinks and food are included with admission. Skybox on Sheffield is fully catered with made-to-order food from Chicago’s legendary microbrewery, Goose Island.
Enjoy gourmet pub food such as grilled paninis, pub burgers with bacon aioli and beer onions, vegetarian and gluten free options, the taco bar, dessert and much more. With over 140 stadium seats and plenty of room to move around on all four levels, you’ll be amazed by our Wrigleyville views!
Tickets available through Eventbrite. Use code: “GooseMe” for $25 off ticket price!

12:00 pm ♦ The Greenbush Brewing One
Murphy’s Bleachers, 3655 N Sheffield Ave., Chicago (773) 281-5356
We’re hosting a Greenbush bottle launch party during Chicago Craft Beer Week. But we couldn’t do it just anywhere, so we’re doing it up on a rooftop overlooking the Chicago Cubs playing the New York Mets at Wrigley Field. For $85 per ticket you get:

Notes: The rooftop opens 1/2 hour before game time and is open until 1/2 hour after. Greenbush beer will be on tap at Murphy’s Bleachers before and after the game. alcoholic beverage service ends during the 7th inning. TICKETS ON SALE NOW AT Brown Paper Tickets.

Noon – 11:00 pm ♦ Bring Your Own Stein Hefeweizen Release/Weisswurst Special
Atlas Brewing Company, 2747 N. Lincoln Ave., Chicago 773-295-1270
Brewed specially for Chicago Craft Beer Week, we’re celebrating the release of our German-style hefeweizen with a Bring Your Own Stein special. Bring in your favorite beer mug, and we’ll fill up to a liter for just $5! We’ll also be offering a special weisswurst platter that will pair brilliantly with the beer, so you can feast like a Bavarian all day long!

Tickets: $20+tax per person. Includes a tasting glass and 20 drink sample tickets. We will also be grilling up fresh Standard Marketmade sausages for purchase.

1:00 – 6:00 pm ♦ Chicago’s Bourbon Trail
Start at Fizz Bar & Grill, 3220 N. Lincoln Ave., Chicago 773-348-6000
No time to road trip to Kentucky for some Bourbon? Come on out Sunday for Chicago’s recreation of the Kentucky Bourbon Trail. A trolley will be taking us to five great Chicago bars each featuring a Bourbon & a barrel aged beer.
The Trail:

Tickets are limited, and are $20 from Brown Paper Tickets. The ticket price does not include drinks at the participating bars. The beers and Bourbons will be available at each stop on a per drink basis. The Map Room is cash only. 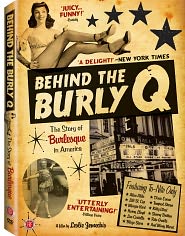 7:00 pm ♦ Burly Q, Burlesque & BBQ! Official Book Release Party
Sheffield’s, 3258 N Sheffield Ave, Chicago (773) 281-4989
Burlesque. BBQ. Books. Vander Mill Cider. What more could you ask for in one evening?
Join us as we celebrate! Author of Behind the Burly Q: The Story of Burlesque in America

, Leslie Zemeckis, will give a brief overview of burlesque in Chicago and will be on hand to sign her books. Leslie is an actress, writer and award-winning documentarian.
The evening includes a special release of Vander Mill’s The Loving Cup Cider along with burlesque inspired BBQ specials. We’ll have a DJ, plus LIVE burlesque performances, a display of burlesque costumes & artifacts and much more!
Bring your friends, this exciting event is open to the public and there is NO COVER.

Follow me on Twitter, Google+ or my Facebook fan page. For more tappings and events, check my Google Calendar. View my One-Take Beer Review Videos. And see the latest of my 2,600 beer reviews on RateBeer.