This is a guest article from author Doug Wilson.

Even a casual observer would  notice the stark difference between the brash rookie lead-off hitter for the New York Yankees and the old-timer behind the plate for the Chicago White Sox as the two teams prepared to play in Yankee Stadium on May 22, 1990.

The Yankee rookie, Deion Sanders, aka Neon Deion, aka Prime Time, had been generating a surprising amount of buzz despite of his .100 batting average. Sanders was a new-age type of baseball player, one of the first to arrive in the big leagues already sporting his own brand. He was a forerunner of the hubris and bling that would characterize athletes of the coming decade. A gifted athlete, Sanders had been a two-time All-American football player at Florida State and the fifth pick of the 1989 NFL draft. After signing a 4-year, 4 million dollar contract with the Atlanta Falcons, he convinced the New York Yankees to pay him $100,000 to play baseball as a hobby. 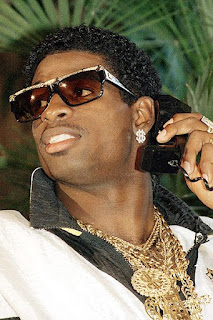 On the football field Sanders was transcendent – electric with a ball in his hands – and the reason the term lock-down corner was invented. In baseball, however, he was a decided neophyte. Moreover, he seemed to be playing the game only to prove that he could. He admitted in an interview that he didn’t even like baseball, that he felt that it was boring, but thought that playing baseball would increase his leverage for a bigger football contract. Reporters found him disinterested and evasive until the television cameras came on, then a switch was flipped and a one thousand-watt personality radiated forth.

Sanders liked to refer to himself in the third person, by his self-given nickname as in this famous statement: “Prime Time wakes up every morning and says to the mirror, ‘mirror, mirror on the wall, who’s the flashiest, best-dressed of them all?’ And every morning the mirror says, ‘You, Prime Time.'” 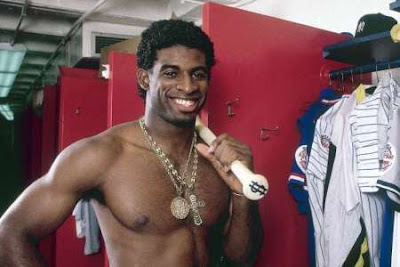 By 1990 Carlton Fisk was playing in his fourth decade of major league baseball. After joining the White Sox in 1981 he had proven to be the rare big-ticket free agent signee–the guy who came through as advertised and stayed in town to earn his money. There was nothing fake or contrived about Carlton Fisk. He came from a time and place where a man’s word meant something; a handshake was binding. He said what he felt, rarely sugar-coated his message, and if the truth hurt, then so be it.

Yankee Stadium had long held a special place in the heart of Carlton Fisk. His years as a member of the Boston Red Sox during the 1970s had been marked by epic wars waged against the Yankees and his pinstriped doppelgänger Thurman Munson. It had been a rivalry that defined the decade for both teams. 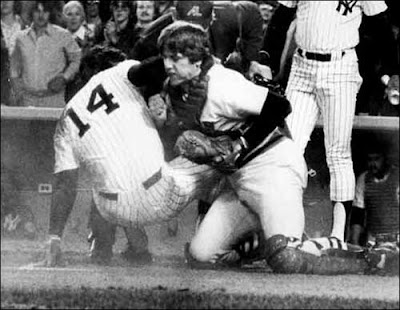 Whereas Sanders had spent only a nominal time in the minors, not pausing to learn the intricacies of the “boring” game, Fisk had slugged his way through four years of the traditional apprenticeship of minor league baseball, enduring the anonymity, long bus rides and cramped, smelly locker rooms Sanders would never know. Although he was himself a phenomenal athlete, Fisk’s career had been marked by grit and determination. He had fought through injuries that should have ended his career. He had resisted efforts, even by his own front office, to escort him out to pasture, continuing to perform better than his peers at his demanding position well into his 40s, playing long past the time when his contemporaries were either coaches, comfortably retired or pursuing other careers. He had done this by sheer force of will along with a fanatical weight-training regimen that frequently found him in the stadium weight room, sweating alone, well after his teammates had gone home after games. These experiences had given him a deep appreciation for the game to which he had devoted his life. 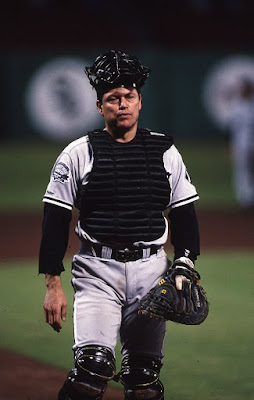 And so it was perhaps inevitable that when the rookie led off the Yankee first and proceeded to draw a dollar sign in the dirt around home plate, his newly self-appointed trademark, the old dinosaur behind the plate couldn’t help but notice and think, “This guy is driving me crazy already.”

In the third inning, with one out and a man on third, Sanders lifted a high popup to the infield. He took a couple of steps, stopped and watched the ball momentarily, then turned and loafed back toward the bench. The spectacle was more than Fisk could bear. He erupted, “Run the f***ing ball out, you piece of shit!” Sanders continued to the dugout without looking back.

As Sanders approached the plate for his next at bat, Fisk pierced him with a steely stare but Sanders refused to make eye contact. The rookie put his head down, drew his dollar sign in the dirt once more–the very dirt that Fisk and Munson had fought over so desperately in the seventies–and mumbled something.

Fisk demanded, “What did you say?”

Sanders answered, without looking up. “Hey man, the days of slavery are over.”

Fisk stood up, removed his mask and stepped nose-to-nose with the rookie. “I don’t care whether you are black or blue or pink or red. If you don’t start playing this game right I’m going to kick your butt right here.” From there the discussion became more animated and personal.

Perhaps only because they felt they should, confused players wondered in from both benches and crowded around home plate. But there was no shoving or jawing as in most baseball fights, they merely stood around and watched the show. The umpire finally separated the two players and the game continued.

Writers were initially confused as to what started the argument. A few days later, Fisk explained: “There’s a right way and a wrong way to play this game. It’s the Yankees pride and the Yankees pinstripes involved here. Some of these guys have got to be turning over in their graves. I play for the other team, but that offends me.”

Over the next few weeks, when asked, he further offered, “It’s professional etiquette. There’s a right way and a wrong way to play this game.”

“There are certain stripes you must earn before you can go about the way you put your mustard on.”

Many felt that it was Carlton Fisk’s finest hour–even better than a certain late-night home run he had hit in another life. He was now seen as the keeper of the game’s lost old-school values. He was stating plainly what a lot of people wanted to say, but hadn’t.

Deion Sanders would hit .158 for the 1990 New York Yankees and bolt the team in August when they refused his in-season demand for $2 million.

Carlton Fisk continued playing baseball until he was forced out of the game in 1993, at the age of 45.

Doug Wilson is the author of “Pudge: The Biography of Carlton Fisk”, the first complete biography of Chicago White Sox icon Carlton Fisk, to be released October 20, 2015.