What Lies Beneath......The Natural and Unnatural in Lake Michigan

Not only do I sail and swim, I am a certified Open Water SCUBA diver. There is a lot happening, and a lot of nothing happening under a boat sailing around on the Lake. Appreciate that at the Chicago end of the Lake, water depths are not all that deep, out 8 miles from shore it’s about 65’ deep. You have to get to the middle of the Lake going across easterly to get to about 90’ (a nine story building).  However, the North end of the Lake is a whole different story, it’s over 900′ deep up there.

One time when SCUBA diving about 4 miles from shore, the water was cloudy as I was going down, the water was warm (not an exact term, Lake Michigan is never “warm”). When I got to about 30’ down, there was a huge change in temperature at that layer (called a thermocline).

I stuck my face through and it was like sticking your face in an ice bath. But, it was completely clear water from there on down the next 35’ to the bottom and visibility was incredible. Why? The upper warm layer has the various plant life growing in it making it cloudy with 10′ visibility, and the cold water layer was too cold for plant life to survive and spotless.

Once when sailing at the North end of Lake Michigan where the water is pristine clear from the surface down to the 50′ bottom, it was my wife who said, “Sailing in Chicago, you forget that water is supposed to be clear!”

Another time I was diving about 2 miles off Montrose on a wooden barge that had burned to the waterline and sank. It had some metal castings on it with dates in the 1860’s. We could only speculate that this barge may have caught fire during the Chicago Fire in 1871, was blown out from the waterfront (it was in the right direction for what the wind direction was on that fire day), burned and sank there. You make up your own theory of what happened!

A steamship carrying a load of automobile brass lanterns had a boiler explosion right outside Chicago Harbor when making delivery to a Chicago Auto Assembly plant.  It has been a favorite diving spot for ages being so close to downtown Chicago.  Of course, it is just one of the many thousands of boats to have sunk in Lake Michigan through the years.

I always thought it would be cool to go find the confiscated slot machines that were dumped 13 miles out in Lake Michigan in 1960. I would think the cold water has kept them in good condition, and this was before electronics, so all of them would be mechanical. A little polish and oil, and they would be good to go. 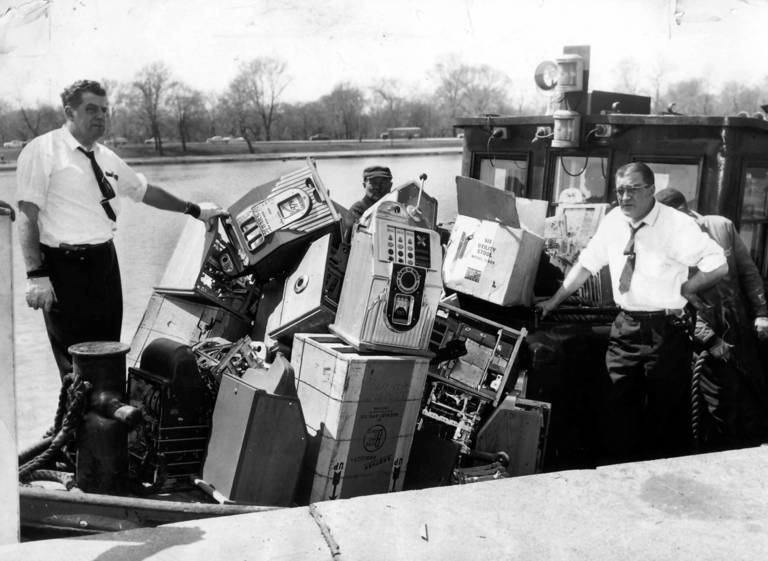 In other dives in 65′ of water, the bottom is endless flat hard pan gray clay with seldom rock piles here and there, but there are a number of beer cans scattered about too.  Once about 4 miles from shore, there was a small pile of junk, including two tricycles.  One can only scratch their head when finding this type of stuff in a place like that!

On July 24, 1915 the Eastland rolled over in the Chicago River killing 844 people. On November 21, 1917 it was purchased by the government and converted into a warship Willamette as a gun boat.

World War I German U-Boat UC-97 (that was used to lay mines) had been surrendered to the U.S. and was used to sell Victory Bonds around the U.S. and Great Lakes. The Willamette was given a mission to use this German U-Boat as target practice and sank it 20 miles East of Highland Park on June 7, 1921. It’s sitting out there on the bottom. On June 23, 1950, a DC-4 flying from NY to Seattle disappeared on a line from Benton Harbor, MI to Milwaukee, WI.  It was traveling through a major storm at the time.  In all, 58 perished. While small debris was found on the Lake’s surface at the time, the airplane has not been found on the Lake’s bottom since.

In 1989 in 75-feet of water off Indiana an oak forest was found. Carbon dating determined that these trees grew after the ice age ended, and before the lake filled up.

During the World War II, Glenview Naval Air Station sent aircraft out with instructions to do “touch and goes” on one of the two practice aircraft carriers (Wolverine and the Sable) on Lake Michigan. When they missed, down into the water they went. Depending who you ask, some say there are between 100 and 350 WWII aircraft on the Lake’s bottom.

17,000 aircraft carrier pilots were qualified there, after they made 8 successful touch and goes. 116,000 landings were made on these two ships, including a George H. W. Bush who qualified with his 8 landings on the Sable.

Statistics on the Wolverine and Sable

I dove off of Jackson Park onto a WWII SNJ trainer. Apparently there are a lot of these around in flight condition today, and not worth much, so no one spends time recovering these from the bottom of the Lake.

However, the more valuable airplanes are being recovered –

As you sail along across the Lake Michigan waters, there is quite a bit of history in what lurks in the waters below you.