Everyone in our family loves wonderful, gooey (and bad for you) pull-apart cinnamon rolls, and I thought adding apple to the mix would make them even better.

In the interests of our health, however, I thought I would find a recipe that was slightly better for us than running down to the Cinnabon.  Cooking Light had a recipe I used as a starting point, but I figured I might as well work in some whole grain, so I made a number of tweaks.  I started the dough the night before, allowed it to rise once and put it in the fridge for Sparky the next morning.

1 cup warm fat-free milk (100° to 110°)
3 tablespoons melted butter
1/3 cup granulated sugar
1 package quick-rise yeast
2 cup whole-grain Chapati flour
1 3/4 cups All-Purpose flour
1 large egg, lightly beaten
1/4 teaspoon salt
I made a “sponge” with the milk, a small amount of the sugar and the yeast and let it sit in the mixing bowl of my KitchenAid for 5 minutes until the yeast woke up and frothed a bit.   I then added the beaten egg, the remaining sugar and the salt along with 1 cup of the flour, mixed briefly, and waited another 10 minutes.  After that, the remaining ingredients went into the mixer and was kneaded for 10 minutes.  The whole thing was covered with a warm damp cloth (right in the bowl) and allowed to rise for 35 minutes, after which I put it in the refrigerator overnight.
Filling:
3 tablespoons melted butter
1 large apple, peeled, cored and diced
1/2 cup raw sugar
1 tablespoon cinnamon
1 tablespoon Wondra or All-purpose flour
The next morning, I peeled and cored a large apple and chopped it into small dice; added 1/2 cup of raw sugar and a heaping tablespoon of cinnamon and a tablespoon of Wondra flour and set it aside.  Sparky got to work:  working on a floured surface, he rolled the dough out into an 11 X 18 rectangle, with the help of some markings we’d made in the flour with a ruler. After rolling out the dough, Sparky spread it with 3 tablespoons of melted butter, keeping about one inch of the nearest edge butter-free (when he asked how much to use, I said, heartily – “All of it; there’s no such thing as too much butter!”  He looked at me, laughed, and quipped “Who are you, and what have you done with my mother?!”)  He then spread the apple mixture over the butter, and rolled the whole thing up the long way, sushi-roll style (it rolled pretty easily, but if it gives you trouble, move the dough onto a large clean bath towel and use the towel to help you roll) and pinching the long seam to seal the roll in a tube. Then, using the ruler, we cut even 1-inch slices.

The apple-roll slices went into two buttered 8″ springform cake pans and were set aside to rise for 35 minutes, or until doubled in size.  Then we baked them in a 350 degree oven for 20 minutes, and brought them out to cool when they were deliciously golden-brown. Icing recipe
5 ounces cream cheese
1/2 – 3/4 cup powdered sugar
1/4 cup (1/2 stick) butter
1/2 teaspoon vanilla extract
Cut the cream cheese and butter into small pieces and cream in your mixer with the whisk attachment.  Add the powdered sugar and vanilla extract.  Taste, if it’s not sweet enough, add more sugar (I like mine not too sweet)  Whip for several minutes until the frosting is light and fluffy and the sugar no longer has a grainy consistency.  Spoon into a ziploc freezer bag (quart size should be enough) and place in the refrigerator for at least 10 minutes or until ready to ice the cinnamon rolls. To ice the rolls: snip off one corner of the ziploc bag and squeeze the icing directly onto warm (but not hot) cinnamon rolls.  Be careful as you squeeze to protect the zipper part of the bag; you don’t want an icing blow-out!  I let Sparky channel his inner Jackson Pollack, and in no time we had delectable Apple Cinnamon rolls for breakfast! 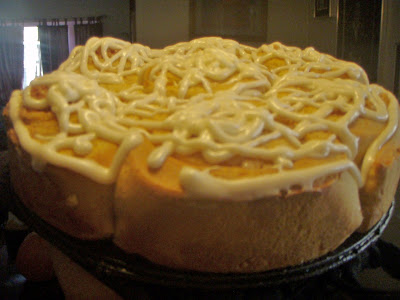