Phew!!  What a sigh of relief, the award season is over.  With last night’s airing of the Oscars we can finally stop caring about movies that we never saw (I had a baby, what’s your excuse?) and wondering which celebrity might make a fool of themselves on national television.  The answer?  No one, because like me, they were bored to tears.

Quick summary of what went down for what was the lowest rated Oscars since 2008.  The low ratings are likely because of all the movies nominated for best picture, none were hugely successful at the box office.  There was no Titanic or Forest Gump or Argo.  I like Chris Rock, he’s made so many attempts to make smart funny movies and they never do well at the box office.  So back to hosting he goes.  I thought he did a good job when he hosted way back in 2005 when the only memorable quote was him asking “Who is this guy?” referring to Jude Law.  Remember Sean Penn got all huffy in defending Jude?  Remember when Jude was a relevant actor?  I thought Rock knocked it out the part with his opening monologue, but along with most everyone else I talked to, I didn’t enjoy the rest of the show due to the redundant reminders of the “no blacks in films” theme.  First, yes, we know there’s a HUGE discrepancy in the amount of parts for blacks (and really ALL minorities in film), and second if you keep beating a dead horse people feel like they’re being lectured to and no one enjoys a three hour lecture.  And then the jokes about the Asian kids? Hmmm, not sure.

So: The monologue was a great way to set the tone with his quick biting humor, Chris at his best… not the best?  Stacey Dash’s inside joke falling flat.  Giving out Girl Scout cookies?  Great.  Funny.  Taking minutes to tally how much money they made?  A waste of time – the show was already too long!

Presenters:
Emily Blunt’s not stupid.  The only way I’d present with the amazonian Charlize Theron is if I was pregnant too.

Seeing Ryan Gosling with Russell Crowe was like passing the torch from the old hottie to the new.   I was happy to see Ali G. back in the house.   Still not sure about Cate’s dress, but I’m sure I couldn’t get away wearing seafoam green feathers.  Reese sounded like she was still Tracy Flick from Election. 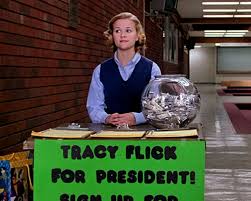 Loved that Veep Biden was there and that Lou Gossett stood up for him.   Respect.  Lady Gaga’s performance was the only song I didn’t fast forward through.   Only Gaga can be that over-the-top dramatic before she even sings a note and get away with it.  If you haven’t watched the video for her nominated song, Till It Happens To You, I highly recommend you do, it’s scary and real in a way that is rarely conveyed in music videos:

It seemed like there weren’t a lot of mega-stars in the audience.  No Hanks, Bullock, Cruise, Aniston, Denzel, Depp….Surprised how sad I felt seeing Jen without Ben, that one is still taking a while to get over.  The ticker at the bottom of the screen was distracting and disrespectful.  I know people bitch about the acceptance speeches going over the allotted time, but really?  The Academy went through the tedious process of asking each nominee, “Um, in case you win, who would you like to thank?”  And really, it didn’t make any difference, the winners STILL thanked everyone and in some cases still went over the time limit.

Obviously, I need to see more of the nominated films because it’s a sad day when I only recognize one winner (Leo)… Speaking of Leo, there’s still a small (deranged) part of my heart that loves seeing Jack and Rose together again.  Am I the only one?

Filed under: Hollywood and Relationships, Uncategorized