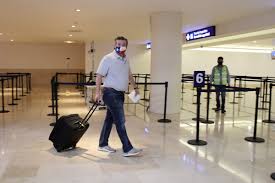 “Well, okay, yes, sure: Ted Cruz did take a little trip to Cancún while his state weathered an unprecedented (and ongoing) crisis. And, okay, yes, his decision to flee with his family as millions of others hunkered down in their dark, freezing homes — as the Texas death toll climbed past 20 people — admittedly does not look great! But please, Ted Cruz is begging you, do not blame him for this dereliction of duty: It was his daughters (ages 10 and 12) who wanted the vacation, and well, what was he going to do — simply say no??”    [thecut.com]

When Texas lost its power and fell into darkness and cold

And in its wake suffered misery untold

What should I do? Cancun she said. And he was sold.

Filed under: Ted Cruz and the Texas power outage