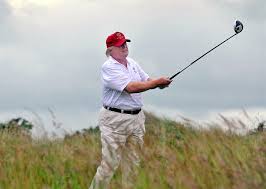 “Michael Barnett, the chairman of the Palm Beach County Republican Party, said he had fielded calls in recent days from reporters from as far away as Germany and Japan asking about Trump’s post-presidency plans and the local GOP’s political future.’I’m sure he’s going to want to take some time to relax and rest,’ Barnett said. ‘It’s been a long and tough four years, and he’s getting beaten up a lot. But all of us are sad to see the end of his presidency — or, some would say, his first term.'”   New York Times

“How many times has Trump played golf as President of the United States? Since taking office on Jan. 20, 2017, Mr. Trump has reportedly been on the grounds of his golf courses or played golf elsewhere 308 times since becoming President, and that’s as of Dec. 30, 2020.”  [golfnewsnet.com]

Four years of work was taxing.

Of course, I’m only jesting.