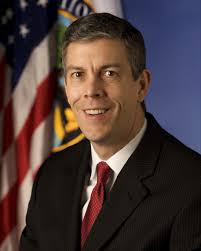 The last resemblance I posited  between two famous people (John Madden and Spencer Tracy) got a dissenting vote from my frequent visitor and astute commenter Jack, who thought Tracy’s jaw was a bit longer than Madden’s.

This time I think the similarity of physiognomies is beyond exception.

Randy Whitman on the left above is currently the head coach of the Washington Wizards.  He directed the injury-riddled Wizards last night in their 114 to 100 win over our Bulls.

To Whitman’s left is former Secretary of Education Arne Duncan.  Who happens to be a professional basketball player manque. He probably has beaten the POTUS a few times at the game of horse.

Gentle readers, what do you think?  Slam dunk?