If You Like the Bizarre and Grotesque, Catch the Ensor Show at the Art Institute

Chances are you’ve never heard of the artist James Ensor. He was Belgian. Lived in the city of Ostend. Which he rarely left. Born 1860. Died 1949. The world virtually turned upside down during his lifetime. Evolution and Relativity. Quantum  mechanics and an expanding universe.  Psychoanalysis and existentialism.  Economic peaks and valleys. Revolution and War.

Sweeping changes in culture and thought.  Tradition shaken to its very foundation.

In painting, even a casual student, like myself, is familiar with Monet, or Van Gogh, Picasso, or Dali.  But Ensor?  Somehow, his place in all the tumult and turmoil had escaped me.

Until I read about him in today’s Tribune. In the Arts and Entertainment section .  There art critic Lori Waxman writes compellingly about this enigmatic artist who was a composite of contradictions.

Waxman puts it this way: “How to square the artist of bourgeois domestic scenes and sensitive seaside landscapes with the painter of chaotic spiritual persecution? Add to that index accomplished still lifes—including a wonderfully weird one that sets a mask amid crustaceans and wine; small, precise etchings of ice skaters, bathing huts and churches(my favorites)dark cartoonish scenes of people wearing carnival masks—and Ensor emerges an artist of many means, and many meanings.”

Waxman’s article serves as a concise  introduction to the  Ensor exhibition entitled “Temptation: The Demons of James Ensor” which runs through January 25.  ‘Temptation’ alludes to the piece de resistance:  “The Temptation of Saint Anthony” which Waxman  calls “one of his most ambitious works.”

“The Temptation of Saint Anthony” indeed was ambitious. It’s nearly six feet tall and comprises 51 sheets of drawings.  The work has not been on display for 60 years during which time  it has been painstakingly restored. It is a complicated juxtaposition of numerous seemingly incongruous images that encircle and beleaguer the figure of the hermit saint.

After I read the Waxman piece, I checked in on my favorite art critic Sister Wendy in her “1000 Masterpieces”. Here is her quick take on the artist.

“Ensor was a man profoundly suspicious of life. He trusted no one and thought that all appearance was deceptive—and probably malicious at that—hence his almost sinister delight in the mask and his revelry in the gross distortions of human forms and features.” 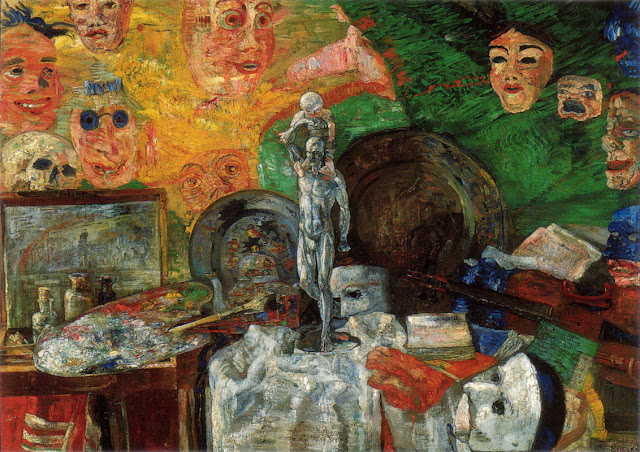