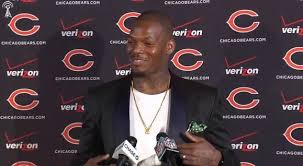 From Today’s Chicago Tribune Sports “Last Row” : “Maybe it’s a real feud or it could all be one big inside joke, but Bears teammates Martellus Bennett and Kyle Long exchanged what seemed like harsh words over Twitter on Tuesday. What ever it is, it apparently kicked off when Long, a guard , found out that tight end Bennett had unfollowed his Twitter account, @KyleLong. Long tweeted on Sunday: ‘I’m afraid I have to reciprocate your act. You have been unfollowed@MartysaurusRex.’ Bennett responded Tuesday morning:’@KyleLong why are you worried about who is following you on twitter? More important (expletive) is happening in my world than Kyle Long’s tweets. @KyleLong I don’t need this form of social currency maybe you do. If a follow from me is going to make you feel wealthier socially, then…u need to get out more. I prefer our day to day interactions in person. But that’s just me. You have my number. Stop the (expletive).’ Bennett signed off: ‘I hope you all 9have) a day full of adventure and discovery. Be blessed.’  Long called the conversation “sarcasm” then went on a self-imposed Twitter hiatus.”

Are mutually quite out of sort.

Bennett says it was wrong

To be called out by Long,

And it’s why his response was so short.