It's Open Season On Hillary Hillary hasn’t thrown her chapeau into the 2016 campaign ring yet and already the Republicans are in panic mode.

That’s really what the  Benghazi witch hunt is all about.  Forget about Obamacare. The GOP has lost on that one.  Besides Obama’s a lame duck.  But Hillary’s in aerial ascent. And fair game for the Right.

So House Select Committee Numero 8 is underway to clip her wings.  Meanwhile Fox News has launched a  daily reverberating barrage of Hillary potshots.  It’s all-out war in the Right-Wing Bubble.

Hidden in the weeds,  GOP strategist Karl Rove , the architect of the Romney fiasco, has been homing in on Hillary.  Rove now is stalking  Hillary using her  fall in December of 2012 as ammo. It may have permenantly affected her mind, he suggests.    Brain damage?  Who said ‘brain damage’ ? Rove asserts.     He’ll let you connect the dots.

Conservatives like Fox’s Elizabeth Hasselbeck and Megan Kelley, as well as the cartoonish Rush Limbaugh, are trying to make Hillary the whipping postergirl for the kidnapping of the Nigerian  school girls.   Hillary failed  to alert the world that these ruthless abductors, Boko Haram, were terrorists.  Somehow, she gave them a ‘green light’.

Even the usually decent and fair Conservative pundit George Will is taking  cheap shots at Hillary.  On Fox last Sunday he derided the ‘BringBackOurGirls’ hashtag campaign that millions around the world have joined, including our First Lady, Michele Obama, and Hillary Clinton.   Will agreed it was a craven and  toothless example of  “hashtag diplomacy”.

Yes, those Elmer Fudd shotguns are blasting away.  And the Republicans aren’t hunting rabbits. 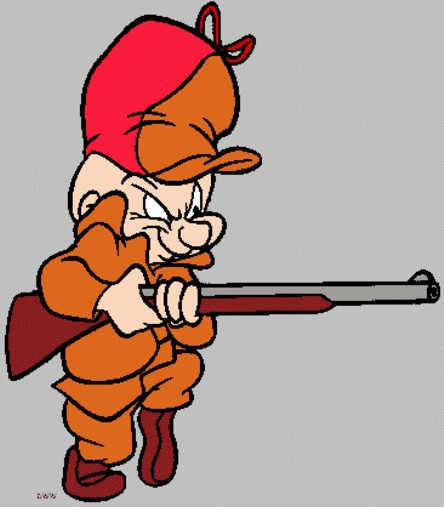