Upton Sinclair: He Saw a Jungle Out There 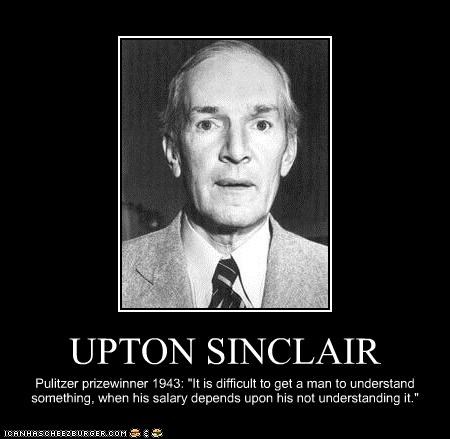 On this day born : Upton Sinclair,
Muckraker extraordinaire.
His expose of Chicago’s  Stockyards
Was a clarion call for more stringent safeguards.

“They had chains which they fastened about the leg of the nearest hog, and the other end of the chain they hooked into one of the rings upon the wheel. So, as the wheel turned, a hog was suddenly jerked off his feet and borne aloft. At the same instant the ear was assailed by a most terrifying shriek; the visitors started in alarm, the women turned pale and shrank back. The shriek was followed by another, louder and yet more agonizing–for once started upon that journey, the hog never came back; at the top of the wheel he was shunted off upon a trolley and went sailing down the room. And meantime another was swung up, and then another, and another, until there was a double line of them, each dangling by a foot and kicking in frenzy–and squealing. The uproar was appalling, perilous to the ear-drums; one feared there was too much sound for the room to hold–that the walls must give way or the ceiling crack. There were high squeals and low squeals, grunts, and wails of agony; there would come a momentary lull, and then a fresh outburst, louder than ever, surging up to a deafening climax. It was too much for some of the visitors–the men would look at each other, laughing nervously, and the women would stand with hands clenched, and the blood rushing to their faces, and the tears starting in their eyes. Meantime, heedless of all these things, the men upon the floor were going about their work. Neither squeals of hogs nor tears of visitors made any difference to them; one by one they hooked up the hogs, and one by one with a swift stroke they slit their throats. There was a long line of hogs, with squeals and life-blood ebbing away together; until at last each started again, and vanished with a splash into a huge vat of boiling water. It was all so very businesslike that one watched it fascinated. It was pork-making by machinery, pork-making by applied mathematics. And yet somehow the most matter-of-fact person could not help thinking of the hogs; they were so innocent, they came so very trustingly; and they were so very human in their protests–and so perfectly within their rights! They had done nothing to deserve it; and it was adding insult to injury, as the thing was done here, swinging them up in this cold-blooded, impersonal way, without a pretense at apology, without the homage of a tear. Now and then a visitor wept, to be sure; but this slaughtering-machine ran on, visitors or no visitors. It was like some horrible crime committed in a dungeon, all unseen and unheeded, buried out of sight and of memory.” [Upton Sinclair, “The Jungle” Chapter III] 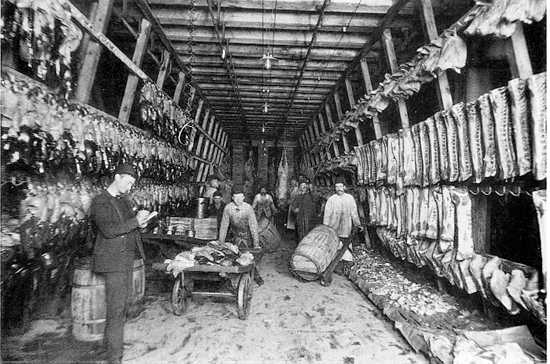