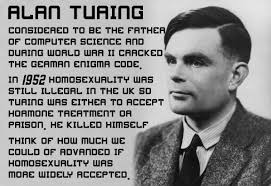 Devised a test for all agreeing

On when a computer’s a human being.*

*”When Descartes declared centuries ago that matter cannot think, he challenged his materialist opponents to construct a machine that could engage in conversation with a human being. if that could be done, he was prepared to admit his error. I would say the same thing today. If computer technologists can succeed in constructing a machine able to engage in conversation with a human being, I, too, would admit error in the arguments I have so far advanced.

One of the most eminent mathematicians among the computer technologists of this century, Alan Turing, claimed that it is, in principle, mathematically possible to construct a machine able to pass this test. He went further and proposed a foolproof way to test his mathematically conceivable Turing machine.

Known as the Turing game, it involves substituting a machine for either a man or a woman in the game. When that game is played with a male and female human being, it is played in the following manner: a man and woman are placed behind a screen. An interrogator stands in front and asks them questions in order to see if he can detect whether the answers received come from the male or female behind the screen. The persons behind the screen are permitted to lie or to resort to any other trick that may help defeat the interrogator’s effort. The answers are delivered in written form so that tone of voice does not reveal the gender of the responder. When this game is played properly, the interrogator’s chance of succeeding is fifty-fifty, which in Turing’s view indicates mere guessing and, therefore, failure for the interrogator.

In Turing’s version of this game , an AI machine is substituted for one of the human beings. Behind the screen is a human being and an AI machine. The interrogator asks them questions to try to differentiate the human from the machine responses, which are delivered, of course, in some uniformly printed manner. Those behind the screen must try to avoid detection by the way they answer the questions.

If the interrogator can succeed only at the level of chance (only 50 percent of the time), he is judged to have failed and the Turing machine is deemed successful. It has performed in a manner indistinguishable from that of a human.” Mortimer J. Adler in “Intellect: Mind over Matter”