Would Chicago REALLY Vote for Commie Karen Lewis for Mayor!?

A new poll of likely Chicago voters seems to find that Mayor Rahm Emanuel is in bad shape for his re-election coming up next year. The poll shows that two other candidates are far and away more popular than the incumbent mayor. One of those two is Chicago Teachers Union President Karen Lewis, a woman who is nearly an out and proud communist. But, if Chicagoans would vote for Lewis, they don’t deserve the vote at all. 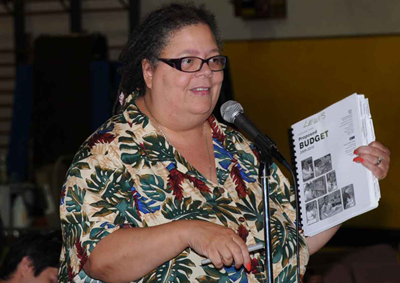 This new Chicago Sun-Times poll shows Emanuel losing–and badly–to two other possible mayoral candidates in next year’s election. The biggest disparity is that between the mayor and Current Cook County Board President Toni Preckwinkle. She really slams Emanuel beating him 55 percent to 31 percent in the poll.

Preckwinkle has made no moves at all to run against Emanuel and insists she won’t. Still, rumors abound that she will throw her hat in the ring, anyway.

To be honest, it really is no surprise that Emanuel is finding low favorables in polling this far out from the election. Mayor Emanuel has failed in many respects as Chicago’s mayor. He has done nothing at all to address the mounting pension crisis, spending is still skyrocketing, he’s solved none of the mess that previous mayor Richie Daley left him, and worse of all violence in the city has soared to never before seen rates of blood shed.

It might not be surprising if a ham sandwich was leading him.

When the paper called Lewis to let her know of the results she reportedly replied, “Well, first of all, I’m sitting here stunned.”

The fact is, we should all be stunned that anyone at all would vote for this hate-filled, near communist who is at the very least an outright race baiter.

For instance, in 2012 Lewis mindlessly threw the race card and claimed that teachers are now looked down upon because they serve “lower class students” and “students of color.” It isn’t because they fail to teach, that they demand higher and higher pensions and healthcare benefits even as no one in the private sector get anything close to what they get. No it is because everyone is racist against them.

Even as the city has been drowning in debt, in 2012 Lewis led a teachers strike because her demands of a 30 percent raise in salary and benefits weren’t being met. 30 percent! Who in the private sector ever gets a 30 percent raise?

By 2013 Lewis was going around telling people that Chicago “belongs” to black people and that whites and Hispanics should have no say in what goes on there.

At another speaking engagement in 2014, Lewis said that math should not be taught as a straight subject. Instead math should be coupled with left-wing “social justice” propaganda to get kids’ minds right.

And Lewis’ socialist/communist styled ideas are fully embraced by her vassals in the union, too. In 2013 Chicago teacher Tim Meegan gave a speech rife with communist buzz words and insisted that a violent revolution ala the revolution that ushered communism into Russia in the last century was coming unless people adopted his left-wing ideas.

In 2012 the CTU was also a sponsor of a socialist program called the “Social Justice Curriculum Fair.”

Despite all this wholly un-American stuff, Chicagoans would vote for Karen Lewis? Seriously? If this is what Chicago would vote for, it seems clear they don’t deserve to vote.