Happy Birthday Chicago's Own Milton Friedman: His 7 Most Notable Quotes 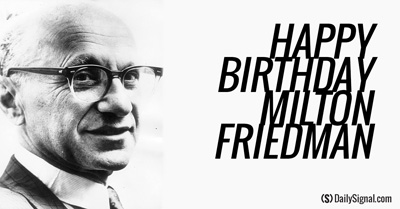 Harry Truman once complained he wanted to find a one-handed economist because he was tired of asking a direct question of those on his economic team, only to have them say, “On the one hand … but on the other hand.”

If there was one hand that noted economist Milton Friedman favored, it was the “invisible hand” of the free market.

Today marks the 102nd anniversary of Friedman’s birth. He died in 2006, but during his long career Friedman won over admirers and drove left-of-center critics crazy with his direct and eloquent defense of capitalism.

Friedman won the Nobel Prize in economics in 1976. But perhaps his greatest influence was nudging people who otherwise may have had little interest in the “dismal science” of economics to look at the world through a new set of eyes and question their assumptions.

CLICK to The Daily Signal for some of Friedman’s most notable quotes.