They’ve ignored the violent region for a decade, they’ve never spoken out about the Islamist radical terrorists who have killed thousands, but now that over 250 girls have been kidnapped by the Islamist terror group Boko Haram, suddenly a handful of Hollywooders have deigned to notice… and weeks late at that.

In April, the terror group Boko Haram went on a mass kidnapping spree imprisoning hundreds of Nigerian girls who were trying to attend school. The Islamists are against girls going to school, naturally. That and they want to money from selling the girls into sexual slavery. Hundreds of grief stricken Nigerian parents have been trying to get the world to notice for weeks.

President Obama has been ignoring the mass kidnapping for almost a month already. But now he is finally starting to pay attention. On May 7 First Lady Michelle Obama Tweeted out a photo of herself holding a piece of paper that sways “#Bring Back Out Girls.”

For his part, the President has begun to offer some help, though no one is quite sure what that amounts to yet.

That is all well and good, but what is galling is the idiots in Hollywood. Suddenly being all worried about the Nigerian girls is all the rage among the hipsters. To express their newfound concern a handful of Hollyidiots Tweeted photos of themselves with stern faces holding signs that say “real men don’t buy girls.” 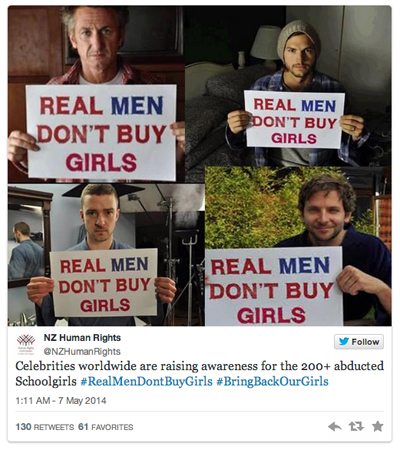 Because, you know, a Twitter picture of the stern looks of Hollyidiots are certain to scare a wild-dog pack of Islamists so bad that they will surely return the girls safe and sound. Why, WHO could withstand the stern look of a Sean Penn?

The conceit of these dopes is amazing. Where were they a month ago? For that matter, where have they been since they each, individually were lucky enough to find such fame and a public platform for their blather? After all radical Islamists have been doing this stuff during these “stars'” whole career!

To suddenly jump in as if this one incident is so unusual is the height of hypocrisy. This same stuff has been going on, perpetrated at the hands of Muslims, for decades and decades. Yet these Hollyidiots have paid no attention at all to the decades of murders, terror attacks, and human rights abuses at the hands of Muslims since day one of their careers–their very births, even.

Now, one may ask: should these Hollyidiots be concerned about Boko Haram and the rest of the Muslim murderers marauding through the world? Not necessarily, of course. But it is they who claim that they care more than the rest of us about the world, they who constantly use their celebrity to push one cause after another, they who ignore real outrages in the world to pretend that the USA is the great evil (I am looking at you, Sean Penn).

So, please, Hollywood. Spare me your empty Twitter campaigns that do nothing, mean nothing, and solve nothing.

In fact, I can sort of blame you in the first place for not advocating the end of Islamism and giving scumbags like Boko Haram all the room in the world to perpetrate their crimes.