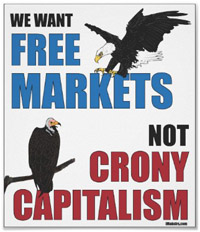 Eric Kohn over at Illinois Mirror has a great piece that highlights the main difference between real capitalism and the sort of crony capitalism (which isn’t capitalism at all) that the left so dearly loves.

Rich Miller is a liberal who runs a well-trafficked website on Illinois politics called Capitol Fax. While he is certainly a Democrat and fully linked into that sort of politics, his site isn’t always mere propaganda for the left–though it is filled with such. Once in a while, Miller also slams a Democrat and he has certainly reported on situations and incidents that Democrats would rather be kept quiet. So, by this I mean his site isn’t mere propaganda as once in a while he does do some actual, good, unbiased reporting, or as Rush Limbaugh calls it a “random act of journalism.”

Miller’s site is also his business. He makes a tidy living off his efforts and he deserves his success for having built a website from the ground up that has become one of the state’s biggest sources of political news. It is also notable for being a website that makes money. Thar ain’t many of them around, to be sure. So, congrats to Rich.

The amusing thing is that Miller slammed Kohn back saying that he found it odd that Kohn, “a pro-business blogger,” would be against a business making money.

But the problem here is that when government is the one doing the paying, that isn’t real capitalism. That is redistribution of tax dollars, not “capitalism.”

So, when Miller (or anyone else, for that matter) is getting hundreds of thousands of our tax dollars for his “business,” he is not really engaging in capitalism. He is engaging in a socialist redistribution of wealth. That isn’t productive capitalism. That is destructive and wasted tax money.