Illinois Democrats want to put a measure on the next ballot to get Illinoisans to agree to change the state constitution to allow a progressive income tax to be instituted. But Democrats are lying to the faces of every citizen when they say that this would only raise taxes on “the rich.” The fact is a progressive rate would immediately raise taxes on every single citizen not to mention open the door for a constant jiggering and re-jiggering of the rates–a jiggering that would only and always go upward. 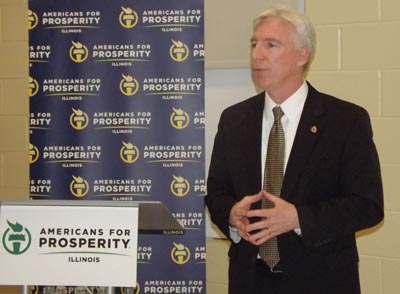 Currently the state constitution has an amendment that stipulates that the state will only have an across the board flat tax for everyone. It won’t be higher for some and lower for others as a graduated tax is. Those who wrote this measure in the constitution put it into law because they felt that a flat tax would help small businesses and give the state’s tax structure some stability. Now, Democrats want to throw that stability to the four winds.

To sell the idea, Democrats are pretending that this progressive income tax would only hit “the rich,” but right at the outset this is a lie. Several proposals show that it would hit everyone right at the beginning.

Let’s recall that the “temporary” 67 percent tax hike that hit citizens is scheduled to begin a sunset early in 2015. The tax rate would go from the current 5 percent down to 3.75 percent (and to 3.25 by 2025). That was the deal that Democrats made in their middle-of-the-night-vote that raised taxes in 2011.

But now Democrats want to welsh on that deal and change the constitution to add a graduated tax that would permanently raise taxes on everyone–even the middle class they claim they aren’t raising taxes on.

Granted the measure the Democrats want to put on the ballot doesn’t mention what rates they are proposing. All they want Illinois voters to do is to OK the end of the flat tax and give them the ability to institute a graduated tax. This ballot measure would give this new taxing power to the very politicians that have turned the state into the worst debtor state in the nation, because, you know, Illinois Democrats always need more money to spend. 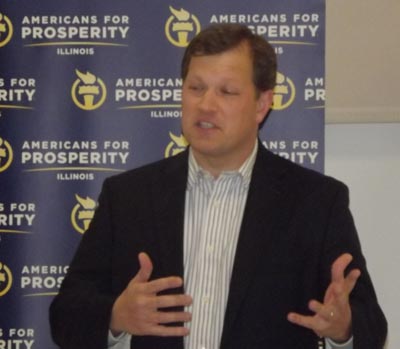 Americans For Prosperity’s Illinois Director, David From, is also aiding to alert citizens to this coming threat.

We the people are just supposed to trust the politicians that whatever graduated rates they choose later after we give them the power to do so won’t hurt us all. “Just trust us,” Michael Madigan and his profligate Democrats are saying with a slimy grin.

But, even without the rates being pinned down for the ballot measure we are seeing some proposals that say that the rates should start at 5 percent (and some want more) for incomes of $5,000 to $100,000 a year. Right there that is already a tax hike on everyone because next year the rates are supposed to fall to 3.75 percent. So, if we OK a ballot measure giving them a graduated tax it will be a tax hike on everyone right at the beginning.

Further, if we look at states that have a graduated tax scheme, 31 of the 34 states tax incomes of $50,000 a year at 5 percent or higher–this is higher than the 3.75 percent we will have if the 67 percent tax rate sunsets properly next year. If Illinois should go to the average of those other states that would be a tax hike on the middle class. If Democrats tell you otherwise they are lying.

Lastly, it has to be said that the Democrats in Springfield proved to be wholly untrustworthy even with the “temporary” 67 percent tax hike. When they passed that bill in the middle of the night in 2011 they said they needed the money to pay down the $8.5 billion in unpaid bills the state owed to creditors and service providers.

Madigan and crew promised that in the first year or so those backlogged bills would be paid off and then the state could stockpile some cash for the future. But instead of using that new tax income of $8 billion to pay off bills, Democrats just spent most of it. Now, after the tax hike, instead of having an $8.5 billion deficit, the state now has a $7.6 billion deficit. So, instead of using the new tax receipts to pay off 99 percent of the backlogged bills as they could have–the whole reason for the 67 percent hike in the tax rate in the first place–the politicians only paid one billion of those past due bills. They spent the other $7 billion on their new, useless programs and still didn’t pay off the past bills.

So, why should the people vote to give these drunken sailors in Springfield even more money by allowing them to raise taxes on everyone with a new graduated tax scheme?

Just say no to the graduated tax, Illinois.