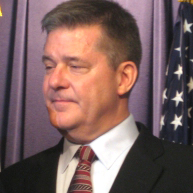 Today, Illinois Treasurer Dan Rutherford has come out to charge that operatives of rival GOP gubernatorial candidate Bruce Rauner is trying to smear him. Rutherford says he is being extorted by an attorney connected to Bruce Rauner who is representing someone who plans to make some sort of harassment charge against the Treasurer.

The thus far unnamed person is apparently an employee of the Illinois Department of the Treasury. Rutherford claims that he was contacted by an attorney who works (or has worked) for Rauner and that attorney said that if Rutherford pays his publicly unnamed client $300,000, no charges will be filed.

Rutherford says that Rauner is initiating a shake down effort and attempting to hurt Rutherford’s campaign for Governor.

Now, Rutherford has put out an official statement about this issue:

Dan Rutherford, candidate for Governor in the Illinois Republican Primary, announced today that his Office of the Illinois Treasurer is launching an independent investigation into allegations made against him by an employee.

At a press conference in Chicago today Rutherford said, “Let me make this very clear, there is absolutely no truth to the allegations. No factual support or merit.”

The Office has retained Ron Braver and Associates. Neil Olson, General Counsel of the Illinois Treasurer’s Office, says Braver has twenty-five years of law enforcement experience and is proven in tough investigations. “Ron Braver will conduct a thorough investigation and will provide a swift and comprehensive report which will reflect all aspects of his findings.”

“Christine Svenson is an attorney making demands on behalf of the accuser and is directly linked to my opponent Bruce Rauner,” Rutherford said. Svenson demanded payment of 300-thousand dollars for the employee to “walk away and keep it under wraps.”

It has been reported in the Springfield State Journal Register newspaper that Rauner has been quoted as saying he has “book on all the Republican candidates” and he’s going to “destroy every one of them.”

Rutherford emphatically stated, “No one, including Bruce Rauner, is going to destroy me.”

Rauner says that he did hire the attorney in question in the past but that this attorney is not associated with his campaign.