Today, November 2, I attended the first ever Americans for Prosperity Restore Illinois Summit–a gathering of conservatives and Republicans looking to bring a renaissance to the Land of Lincoln. 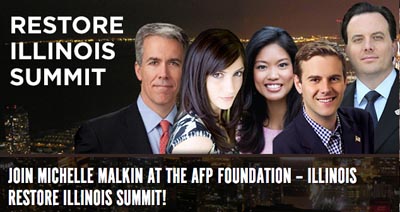 I did not take video, but Ulysses Arn did. He’s uploading as I post this so later on check out Arn’s Blog for video.

In this post I’ll relay some good quotes from some of those speakers and offer the essential bullet points of the four GOP candidates for Illinois Governor. Now I did not see everyone, so this post will concern only those I was able to catch. 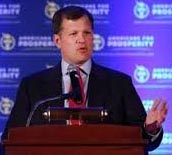 Sponsored by the Illinois chapter of Americans for Prosperity, some 400 tickets were sold for the event–pretty good for a deep blue state like Illinois. Also pretty good since the event was held in Chicago, that deep blue state’s bluest corner. (AFP Ill. Director David From left)

The morning started with an address form AFP chief Tim Phillips (which I missed because I was 45 minutes late to the event) and AFP State Director David From. Then came radio host and Townhall political editor Guy Benson. I can’t say much about his address since I walked in just as he was finishing up. 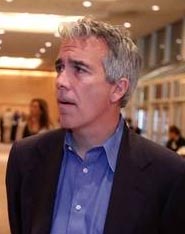 Walsh noted that he may never be able to run for office in Illinois again because of his dour assessment of both the Illinois GOP and the direction of the country. Whatever his future holds, Walsh had a few good quotes that I was able to jot down.

In one instance, Walsh noted that because of how our schools have failed us, “too many Americans are stupid, they are misinformed, they know more about Dancing w The Stars than they do of Thomas Jefferson.”

Obamacare Panel with Walsh and Benson

Later Walsh worried that it might just be too late to do anything about Obamacare. But on a panel about the doomed law with Guy Benson, Walsh did disagree with Benson who contended that the defund Obamacare effort was a waste of time. 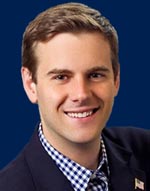 Benson (left) contended that Obamacare may just collapse under its own anti-American weight. Walsh, however, pointed out that even if this happens it was no excuse not to fight against it.

“The idea that Obamacare may fail on its own doesn’t excuse Republicans from fighting it with all they have right now,” Walsh said.

I happen to agree with Walsh, here. I mean there are few entitlements ever repealed once passed. I joked that maybe the only entitlement Congress and liberals ever revoked was the guarantees of the U.S. Constitution! 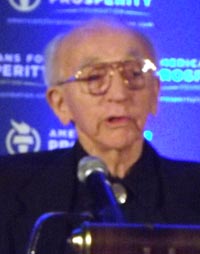 Longtime political activist and conservative Jack Roeser was given a lifetime achievement award this weekend, as well.

Head of Family Taxpayers Foundation, Roeser has been a leading voice against high taxes in Illinois.

For nearly 50 years, Roeser has been an important force behind nearly every conservative movement in Illinois. He was one of Ronald Reagan’s first boosters in a time when few in this state wanted to back the Gipper–despite what they say now with their revisionist history.

He is the driving force behind Champion News on WIND and is the bane of the Illinois Teachers Unions. 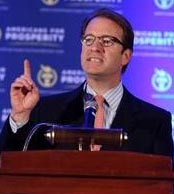 Sixth District Congressman Peter Roskam next got up and delivered another one of his fine speeches. One thing he said stuck out for me. He was talking about how people are complaining that there is “gridlock” in Washington.

Roskam replies to that with a quote from former Ill. Congressman Henry Hyde: “The only thing worse than Congressional gridlock is the greased chute of government.”

Next up was local GOP legend Dan Proft, one half of the morning team for WLS radio.

Proft went on to say that how bad Illinois is can be summed up in three numbers. His third number was the number 51. This number represents the fact that Illinois is last behind all fifty states and the District of Columbia for state spending on services for the disabled.

Now, imagine that. Here we are a state with some of the highest taxes in the nation yet we are dead last in spending on these sorts of services. But aren’t these the sort of services that liberals are always claiming that only they want to secure for those most vulnerable citizens?

So, we have all this state spending, all these high taxes and we are dead last in services to the very people liberals claim they want to help?

How can that be? It just shows how bad this state is.

But I missed Dana

I hate to say that I was pulled out of the main hall by someone wanting to ask me a few questions so I missed most of what Dana Loesch had to say. But you can listen to Dana on her St. Louis-based radio show and see her on The Blaze TV.

The Four GOP Gubernatorial Candidates Give Us Their 10 Min. Pitch

Next came the four GOP candidates vying to be chosen as the Party’s nominee for governor.

Each had about ten minutes to make their case to the audience so following I will distill their points down for brevity. 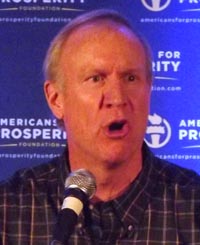 1-Restore Free market ideals to Illinois
2-Take on the government unions, put the government unions in their place
3-Education and training- We should be world class in our schools (we need to battle the teachers unions, eliminate tenure, institute merit pay)
4-Term limits on every state office- 8 years and out. 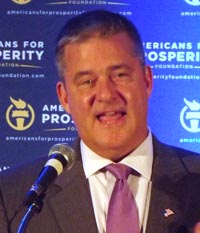 I’m not cozy with the Chicago politicians but I am the only Republican that has proven he can win state-wide office.

The three things I’ll do as Governor:

1. I’ll put people back to work! I’ll likely have a Democrat controlled legislature so I’ll put the Lt. Governor in charge of creating jobs.

2. I have the authority to appoint the directors of state agencies. I’ll require them to do all they can to create and maintain jobs.

3. I’ll also be the chief marketing officer. This state is great for geographic location, training opportunities, and capabilities. Buy we have no one in office selling this state.

I am the one guy that’s been able to win in this blue state. I got more votes down ballot than our current governor got n the last election. 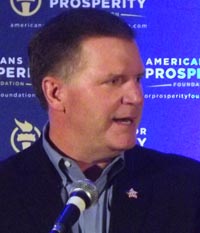 We need a governor who will unequivocally say we will not raise taxes on the backs of the people of Illinois. We need a governor that will not dictate to the legislature on what we will spend but who will say that we won’t spend more than we need, one who will hold the line of spending.

We have to convince our people that if we are to take back this state we need term limits in Illinois.

I won 98 counties of 102 in the last election gubernatorial, but we built that foundation of trust and respect. We need to build on that in Cook and the collar counties.

Ill. has the most opportunity of any state in the union but we need your help. 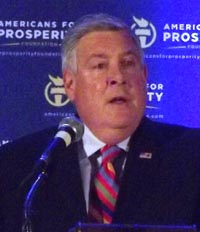 I have proven to be a man that can get things done in the state legislature. I was instrumental in bring Navistar from Indiana to Illinois. I have a track record of working with small businesses.

But I was the chief of staff of Gov. Jim Edgar. Edgar was the last clean governor this state had. We left a surplus, downsized state governor, our unemployment was below the national average, and we had robust job creation.

We need a constitutional amendment that says if we don’t have a balanced budget the legislators don’t get paid.

I’ll institute an office of the “repealer.” We have too many regulations and I’ll have a man that will look over all of our state regulations and we’ll get rid of the ones that are holding the state back.

We must have a low, flat income tax.

Finally, I can make a Dem. led legislature live within its means. I have a proven record of working to get things done in this state.

The keynote speaker was Michelle Malkin. But the poor dear was so sick–she practically had lost her voice–that I could not quite make out much of what she said.

She soldiered on and did her whole presentation, but I was just not able to pick up most of it (with my own bad hearing a factor). I was also disappointed not to be able to just wave at her to let her know I was in attendance as I usually do. Still it was great to see her and we had a nice visit down in Florida two months ago, so there’s that.

So, despite that I didn’t get to see everyone, hear all the speeches, and see all the discussion panels, it was a very good event; a good one for AFP-Illinois to build upon.