How I Saved The Drunk Woman on the CTA... Or Did I?

My intention was to save her, this drunken woman. But once it was all over–in fact days afterward–I realized maybe I wasn’t such a great help after all. 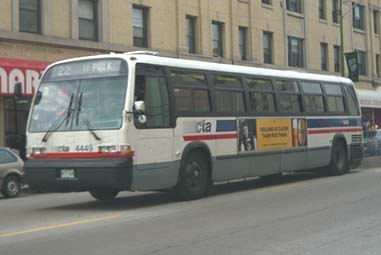 So, it was 1992 and I was a daily commuter on the CTA from the south suburbs to downtown. I was working for a print shop at 6 East Monroe Street, a portion of a building that now doesn’t even exist even as the address does.

This was at the corner of Monroe and State Streets (now the American Apparel store) and held such businesses as law offices, travel agents, jewelers, and other businesses. It was eventually subsumed by the store that surrounded it and all the tenets in that sliver of office space were evicted.

I was also going to school at the time downtown and working part time to help pay my way.

Anyway, I always took the bus home and one fall day as I got on at my usual State Street spot and sat down I soon smelled that mediciny smell that one smells on someone who has been drinking too much hard liquor.

At first I didn’t worry much about it as the bus began its journey. Shortly I realized that the drunken person in question was actually sitting right next to me.

It was a young woman in her late twenties (I was 23 at the time) dressed in a fur coat, nice clothes, and carrying a large art portfolio. The portfolio was open and I could see architectural drawings stuffed inside.

The woman was obviously hors de combat, as they say–OK, as I say. I never met anyone else that uses that phrase. I noticed that her head was rocking back and forth with the movement of the bus. She was fitfully sleeping in a drunken stupor.

About 20 minutes into the ride she sat bolt upright and almost puked, but didn’t. Her mouth made that movement. Bleah, almost…. Not quite.

She then sort of came to for a second and slurred that I was just some guy that thought he’d take advantage of her because she was drunk and then complained that she couldn’t find a job as an architect. She then lolled herself right back to sleep.

I knew this was a bad, bad sign and that it wouldn’t be long before she let loose and puked up a storm.

So, I got an idea. I asked a guy standing next to me if he needed the Chicago Trib he was holding. Since he didn’t, he let me have it and I spread it around the drunken woman. I was sure she didn’t want her drawings or nice coat ruined if she puked.

When I started to lay out the paper, I asked an old woman in the seat across from me if she’d hold my school books. The woman amusingly looked me in the eye and said, “I don’t want to have ANYTHING to do with it!” Another woman was kind enough to hold my books.

I spread the paper, but just as I put the last paper around her, she ralphed with the worst of them. It went everywhere…. but not on her or her nice stuff.

So, I got her up, gave her money for a transfer got her off the bus and returned to my seat. As I got back on the bus, the whole bus erupted in applause.

There I was absorbing all the applause for a good deed done well.

But it wasn’t until days later that I realized that maybe I wasn’t such a big help to that unnamed woman. After all, I just pushed a woman off a bus and onto the street at a stop that wasn’t hers and cast her adrift there… and in her totally drunk condition at that.

That wasn’t such a good idea, was it?

Wish I’d thought of THAT at the time!