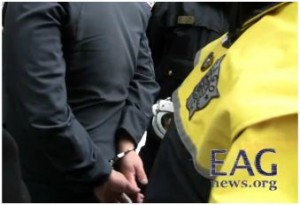 Jeremy Segal was filming the protesting Chicago Teachers downtown on Monday trying to get a few questions in with Chicago Teachers Union President Karen Lewis and agitator Rev. Jesse Jackson when operatives for the union began to push him, manhandle his video equipment and punch him in the chest.

Segal was filming for EAGnews,org when the assault occurred.

It was witnessed by a CTU supporter who was so unnerved by the violent treatment that she told police what she saw.

But even though the police gathered up the men that assaulted the reporter, they were later let go even though Segal told police he wanted to file charges.

Obviously the police were working in tandem with the anti-American union thugs.

And what was one of the things that Segal wanted to ask Jackson and Lewis about? He wondered why the CTU allowed the International Socialists to participate in the march?

You can see the full details of this un-American fiasco sponsored by and supported by the Chicago Teachers Union at EAGnews,org.