There is NO Such Thing as an 'Assault Rifle'

There is no such thing as an “assault weapon.” Oh, the left pretends there is such a creature but when they try to define an “assault weapon,” all they end up doing is describing what such a weapon looks like not what it does or how “dangerous” it is.

Essentially you get this… 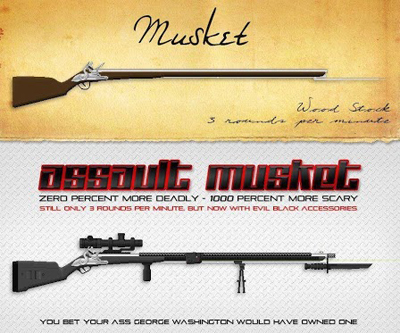 Note that the two weapons in the illustration above are both single shot muskets. But when all sorts of cosmetic bric-a-brac is added to the musket, it sure makes it appear more menacing.

All the fancy grips, plastic stocks, bayonet lugs, scopes, all this stuff is superficial, cosmetic, and none of them make the weapon any more dangerous than when it started out.

Well, this is where we are with the nonsensical “definitions” that liberals foist on us all as they attempt to define what an “assault weapon” is. All we get are what it looks like, not what it does.

As the photo above proves, ANY GUN can be made to LOOK LIKE an “assault weapon.” But what a gun looks like has precisely nothing to do with what it can do, how quickly it can fire, how supposedly “dangerous” it is.

But, liberals don’t care about truth and facts. You see, there is only ONE REASON liberals are using this fake “assault weapons” line. They think that by using it for so-called “common sense” gun banning laws they can get their foot in the door for later attacks on the Second Amendment.

When Democrats say that no one wants to take your guns away, they are liars. They have every intention of doing so and they start by whittling away at our rights bit by bit.

Today the anti-Constitution left has invented a fake “assault weapon” to scare people. Tomorrow they will simply dispense with the subterfuge that all they want to do is ban certain guns and will start confiscating guns altogether.