Could CNBC Be Depriving Viewers of Vital Information? 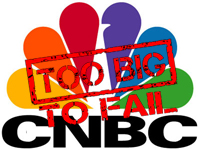 There was once a day when particular media outlets were so dominant that they could essentially make the rules on who they permitted to appear with them whether in print, on the radio, or on TV. Those days are long gone, of course. So, why does CNBC still think it has the power to demand that guests appear solely on its network? And, in so doing is CNBC depriving its viewers of the vital financial information that they need to plan their business days?

CNBC is the most watched financial-centered cable news network, certainly. Though its younger competitor, Fox Business Network, has been making amazing inroads into CNBCs viewer base, the older network is still on top of the heap… for now.

But will that hold if CNBC’s booking practices stay as they are now? One might wonder.

For those unaware of the controversy, here, CNBC refuses to book guests that have bookings on other networks on the same day as their appearance on CNBC. As David Folkenflik of NPR reveals, CNBC has a stark rule in its booking scheme.

“CNBC POLICY REMINDER: Per CNBC policy, we cannot use guests who have a same-day appearance on Fox Business or Bloomberg… By accepting a booking with CNBC, you acknowledge and accept the terms of this policy.”

So, if CNBC is purposefully excluding newsmakers that are set to appear at other venues, does CNBC expect those newsmakers to keep themselves exclusive to CNBC? Really? In THIS media climate? Doesn’t that seem a bit absurd in an era when striking when the iron is hot is the only way to play the game?

So, this forces us to ask, if CNBC won’t book someone that intends to appear on other news outlets because what they have to talk about is in the news… might we find that CNBC is not keeping up with the news cycle?

Might we find that CNBC’s viewers are getting slighted of happening news because of CNBC’s strict booking practices?

Further, why does CNBC think so much of itself that it imagines it has the power to keep newsmakers from getting on as many outlets as they can to sell the points they are trying to push? The days of some reporter, newspaper, or other media outlet asking, “DO YOU KNOW WHO I AM?” are long over, after all!

Jeff Reeves of the website InvestorPlace on a page called The Slant also makes a good point in his recent discussion of this tale.

Every modern media consumer uses multiple sources, and that’s ultimately a good thing for public discourse. Secondly, every modern media organization should know that it’s willfully naive to act like they have any old-school gatekeeper power now that there are so many options and the Internet responds instantaneously.

Reeves also warns CNBC that some of its bench of guests might get a bit sick and tired of being dictated to by the cable channel. Especially since many in that stable of guests are high-powered CEOs and business titans, folks who aren’t used to having their actions dictated by others.

It is a warning CNBC should take to heart.