I Think I was Born in the Wrong Century!

Being a conservative in the media, it is pretty plain that I am the odd man out. When I survey all my media brethren who are almost to a person extremely far to the left I realize I am just not one of “them.” But tonight I experienced one of those little incidents that seems to tell me that I was born in the wrong century… or at least in the wrong half of the century in which I was first introduced into this world.

Tonight’s little incident made me ask of myself, am I old? Am I old fashioned? Or maybe both? I guess I have to admit I am at the very least a throwback to an earlier age.

So here is what happened…

Tonight I went to the grocery and ran across a new beer I had yet to try. It is called Batch 19 (www.batch19.com) and is supposed to be based on a recipe from 1919, one brewed just before Prohibition.The brewers claim they found the recipe in an old brewery’s dusty records and was typical of the beers made previous to when the stupidity of Prohibition wiped out so many thousands of America’s jobs and small businesses in 1919 and beyond.

Standing in the beer aisle, I think to myself, “yeah, I’ll try that.” So I grab a sixer and go to the front to buy it. Then I realize the situation I am standing in. I realize I am a white guy with a large mustache, wearing a 1940s era leather bomber jacket, and sporting an early large brimmed fedora, and here I am buying beer from 1919.

What century is this, again? 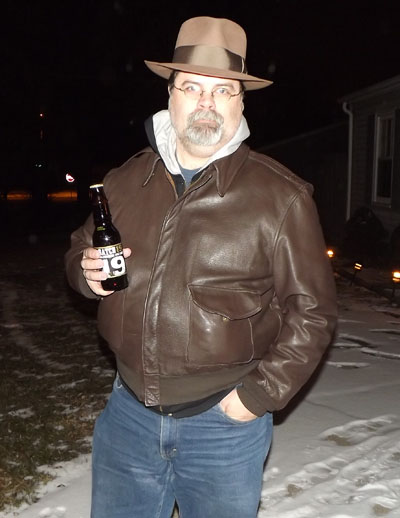 As to the beer, it’s not bad. Full bodied but not too dark. I like it.