Quinn Gets an 'F' in New Govs. Report Card 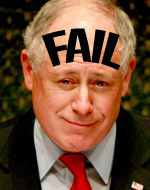 Well, looks like Illinois gets another great award proving it to truly be the worst of the worst in all the United States. This time our esteemed governor, Pat Quinn, has been awarded a richly deserved grade of “F” in a new report rating the nation’s governors for how well their states are doing.

So, once again Illinois rates at the bottom of the pile with a governor that gets a well-deserved failing grade. This time joined Quinn is joined at the bottom by four other guvs. Chris Gregoire (Washington State), Neil Abercrombie (Hawaii), Mark Dayton (Minnesota), and Dan Malloy (Connecticut), each received the grade of “F” for their monumental failure as their state’s chief executive.

Naturally, these five flunkers share one thing in common: they are all Democrats. In fact, the report card only identifies two Republicans among those governors getting a “D” or an “F.” Arizona’s Gov. Jan Brewer and Tennessee’s Bill Haslam both received a “D.”

The 11th annual report sponsored by the CATO Institute grades the nation’s governors on their records of taxing and spending.

Many states are facing major fiscal problems in coming years. Rising debt and growing health and pension costs threaten tax increases down the road. At the same time, intense global economic competition makes it imperative that states improve their investment climates. To that end, some governors are pursuing broad-based tax reforms, such as cutting income tax rates and reducing property taxes on businesses. The bad news is that many governors are expanding narrow “tax incentives,” which clutter the tax code in an attempt to micromanage the economy.

So, in what other categories does Illinois rank as the worst of the worst?

Here is a handy-dandy list of Quinn’s and the Democrat’s major failures:

Of course, it isn’t all Quinn’s fault. The Illinois Democrat Party deserves a VERY large share of the blame. And don’t forget the feckless Illinois GOP whose insular, good-old-boy brigade refuses to allow anyone with new, fresh ideas into the party.