The Atlantic Criticizes Romney Over Libya, But Mitt Was Talking About Egypt 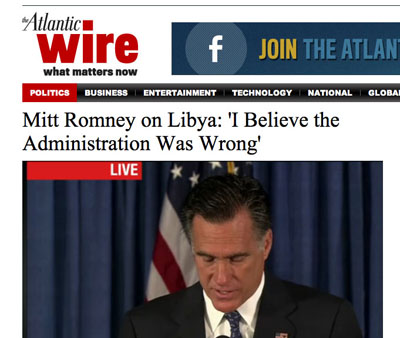 A screen capture of the original headline

It wasn’t long before The Atlantic Wire changed its headline dropping the “On Libya” part.

Romney was criticizing Tuesday’s statement made by the U.S. embassy in Cairo. Romney decried the embassy’s apologizing for the American principle of free speech. The statement released by the embassy reads:

The Embassy of the United States in Cairo condemns the continuing efforts by misguided individuals to hurt the religious feelings of Muslims – as we condemn efforts to offend believers of all religions. Today, the 11th anniversary of the September 11, 2001 terrorist attacks on the United States, Americans are honoring our patriots and those who serve our nation as the fitting response to the enemies of democracy. Respect for religious beliefs is a cornerstone of American democracy. We firmly reject the actions by those who abuse the universal right of free speech to hurt the religious beliefs of others

There was noting “less-that-factual” about Romney’s statement on the release made by the U.S. embassy in Cairo in the first place. An embassy is under the control of the president and if the Cairo staff made a statement it is rightfully seen as a statement made by the President of the United States.

As it happens, Barack Obama himself later backtracked on the embassy’s statement. So, what we have here is the Old Media attacking Romney for criticizing a statement that even Obama is criticizing!