This weekend I jumped the train from suburbia and trekked downtown to the Gene Siskel Film Center to attend a private screening of Dinesh D’Souza’s movie 2016: Obama’s America, a film that was chilling in its expose of our President’s true motivations.

The screening of D’Souza’s 2016 was held by Freecapitalismnow.com and hosted by Chicago Republican gadfly William J. Kelly and the filmmaker himself, Mr. D’Souza. What I saw, even as I already knew much of the material from dispirit sources, was still eye-opening.

In 2007-08, Americans didn’t know anything at all about the man they were about to make the President of the United States. They elected Barack Obama to the highest office in the land despite knowing nothing about him, his ideas, or his past, and, unfortunately, he’s led this country to despair. Now it is time for him to run for re-election and Dinesh D’Souza has made a film he’s titled 2016: Obama’s America in order to help make sure it doesn’t happen a second time.

In the film, D’Souza relied heavily on Obama’s book, Dreams of My Father He notes that the book isn’t titled dreams of my father, but from him. This, D’Souza says, is the tip off to the President’s true ideology.

I have to admit that I’ve found no reason to read Obama’s so-called autobiography, Dreams From My Father. I have seen no reason to read this thing because I had heard enough about how anti-American it is that the whole idea seems quite unappealing to me. I have no interest in bothering myself with another extremist, left-wing screed against America, after all.

But what I missed from reading Obama’s self-dramatized life was a barring of his soul and a revelation the ideas that motivate him the most. D’Souza sums it all up in one hyphenated word: anti-colonialism.

Now, D’Souza doesn’t say the latter. In fact, he rather avoids all incendiary claims and engages in no pinpointing of Obama in anyway save calling him an exponent of anti-colonialism. And that is what makes this film so powerful. It sets out clear connections between Obama’s radical ideology — which is D’Souza’s conjecture — and those extremists that he really did surround himself growing up, chief among whom was his anti-American, Marxist father, Barack Obama, Senior.

But it wasn’t just his absentee father that inculcated the President with those “dreams.” It was his equally Marxist and anti-American mother, his communist grandfather and grandmother, the major communist figure he was mentored by in the late 1970s (one Frank Marshall Davis), a Marxist professor friend that was so far left he was even driven out of South America, his two domestic terrorist pals that helped him launch his political career (Bill Ayers and Bernadine Dohrn) and the fiery American preacher that hates America so much he constantly denounces the U.S.A. from his pulpit (Jeremiah Wright). 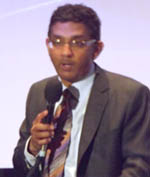 But, D’Souza doesn’t fill the screen with denunciations and claims. In fact, what makes this movie so frightening is that D’Souza plays excepts of Obama reading his own book (for the book on tape edition of Dreams). As he explained in the Q&A session after the film, D’Souza doesn’t have to make claims that Obama is an extremist, anti-American with ideas that have as a main goal the cutting down of American power and influence. He allows the President himself to tell us that with his own words, in his own voice, from his own book.

The takeaway from 2016: Obama’s America is that Barack Obama wants to make America just a small, powerless dot on the international landscape. Obama feels that the U.S.A. is evil and that it needs to be taught a lesson. Obama doesn’t care if the U.S.A. is materially harmed by his actions because he feels that America deserves the punishment he intends to level upon her. Obama thinks our founders, our parents and we are evil and need to be slapped down.

Obama, as D’Souza shows, is fulfilling admirably (I mean “admirable” ruefully, of course) the anti-American goals of the anti-colonialist’s most desired goals, the cutting down of the United Sates of America. Every American needs to see this movie before they vote in November. 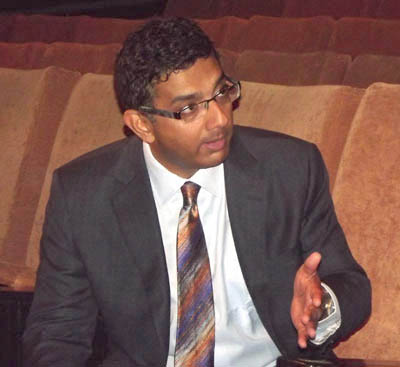 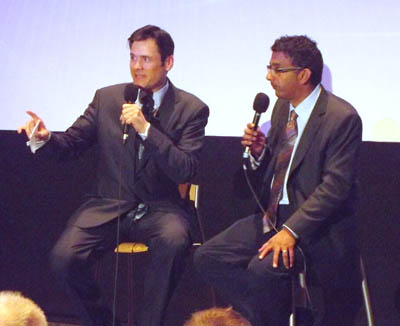 William J. Kelly and Dinesh D’Souza in the Q&A session 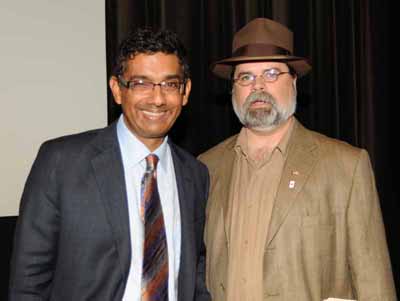 Dinesh D’Souza and me