The Free Press Act: A Proposal to Reinvigorate Our Freedom of Speech 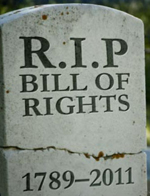 In this day of mounting threats to our freedoms it is time to reinvigorate our Bill of Rights and so Senator John Kyl (R, AZ) has introduced S. 3493, The Free Press Act. This bill aims to prevent nuisance lawsuits meant only to quash freedom of speech, to stop the intimidation of journalists, bloggers, and those testifying before government.

One would have hoped that such a bill would be unnecessary, but in our day of increasing attacks on freedom of speech perhaps the time has come to reaffirm and remind us all of the legacy our founders left to us.

The biggest development overseas in the campaign to eliminate free speech and freedom of the press has been the constant use of defamation lawsuits to silence the sort of speech certain parties are not fond of. These barrage attacks are often called “lawfare” and, sadly, they have come to our shores, as well.

In our system these attacks on free speech are called “SLAPP lawsuits.” These lawsuits come in two varieties, one against people who testify before government committees or in hearings and, two, increasingly against people who write opinion editorials or news reports. This could also apply easily to bloggers.

The method is to sue someone for defamation for giving his opinion “on a matter of public concern or that relates to a public official or figure.” In essence, someone that doesn’t like what was said about him on a public matter can launch a nuisance lawsuit in the hopes of cowing someone else and dampening their free speech. Plain and simple, these nuisance lawsuits are meant for the single purpose of getting someone to shut up.

Sadly, these frivolous suits are not at all uncommon. A recent search found many thousands of them going back decades. These lawsuits have simply gotten out of hand and Kyl’s bill attempts to provide a more instantaneous remedy to put an end to the mess such lawsuits create.

The short summary of the bill states that the bill is meant, “to protect first amendment rights of journalists and internet service providers by preventing States and the United States from allowing meritless lawsuits arising from acts in furtherance of those rights, commonly called ‘Strategic Lawsuits Against Public Participation’ or ‘SLAPPs’, and for other purposes.”

As Kyl said in a statement about his bill, the Free Press Act, “would create a Federal anti-SLAPP statute for journalists, bloggers, and other news media, authorizing them to bring a special motion to dismiss lawsuits brought against them that arise out of their speech on public issues. Once the special motion to dismiss is brought, the nonmoving party must present a prima facie case supporting the lawsuit; if the nonmovant fails to do so, the lawsuit is dismissed and fees and costs are awarded to the movant.”

In other words, the FPA would force those initiating frivolous SLAPP lawsuits to justify their case before moving forward. If they can’t convince a judge that their case is solid, it is immediately thrown out. This bill also would force the plaintiff to pay the defendant’s costs if his SLAPP suit is dismissed.

Senator Kyl is finding support for this bill across the spectrum from journalist groups, to free speech advocates, to conservatives and even some liberals, this bill is getting vocal support. It is currently in the Committee on the Judiciary in the Senate. More Americans need to know of the existence of this bill so they can urge their representatives and senators to get behind it.