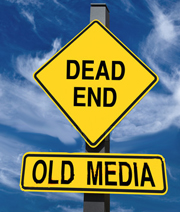 The news industry takes another hit this week as the Ruppert Murdoch-owned digital newspaper, The Daily, announces that 29 percent of its workforce, 50 employees, will be laid off.

News Corp launched the iPad-only publication (via iTunes) to great fanfare in February of 2011. Originally an Apple offering only, The Daily can now be downloaded via a Facebook and an Android ap and is also a package feature on Verizon Wireless devices.

It was reported that the operation of The Daily was going to cost $500,000 a week and Murdoch one said that he needed to gain 500,000 new readers a week to break even.

At a cost of 99 cents per week or $39.99 yearly, The Daily is not a great expense for daily fresh content and news industry insiders have been closely watching the e-publication in hopes that it would breathe new life into their floundering industry.

Alas, it seems that the low cost is still not enticing enough readers.

Spokesmen for The Daily have announced that the in-house sports team will be cut — future sports content will likely come from Fox Sports — that the full opinion section will be cut down and merged with the news section (clearly marked as opinion when it is done). The format will also be changed.

Originally, the format was horizontal as made for the iPad. But upon opening up the news application to other devices, it was realized that a vertical format is a better idea so the horizontal format is being dropped.

Remaining staff at The Daily still insist that as the age of tablet computing grows, they will grow with it. But, “Like all good digital products, however, we must change and evolve to remain fresh, competitive and sustainable,” said publisher Greg Clayman.

Sustainable is the problem, though. In its first 18 months of existence, The Daily has yet to break even much less make a profit.

The news industry still awaits that next great development that will save them.