Race to the White House: The American Media's Lack of Moral Discernment 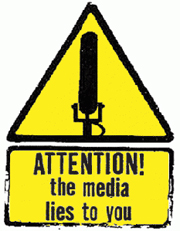 Many on the GOP side of the aisle have been complaining that Mitt Romney seems to be incapable of hitting back against the constant stream of lies, innuendo, and calumny that Obama and his minions have unleashed thus far in this campaign. Romney’s campaign has been a veritable campaign of milquetoastiness by comparison. Yet the Old Media has the gall to claim that there is too much mud slinging going on by both sides.

This inability of the press to discern the tenor of the two campaigns proves two things clearly. First that the media are ignorant of the concept of morality, certainly, but it also pretty much proves that they are sold out to Obama’s reelection campaign.

Take Politico’s recent piece where they complain that “even the media’s had enough” of the “disgrace” that this race has become.

The race for the White House has grown so toxic that it’s become a top topic among reporters and analysts covering the contest — and some are even calling on President Barack Obama and presumptive GOP nominee Mitt Romney to call a truce.

Politico goes on to repeat carping from such Old Media mavens as Brian Williams of NBC News, former Democrat operative and current NBC/MSNBC correspondent Chuck Todd, CNN’s lefty shill Soledad O’Brien, and others, all of whom claim to be tired of the “ugly” campaign.

This is at least the third time that Politico has carped about the death of the high-minded campaign and every article takes the same track: both sides are at fault.

Well, we are all tired of the “ugliness” in this campaign, for sure. But the problem with these reports is that this ugliness is not coming from both sides. In fact, it has been predominantly from Obama, his super PACS, and his surrogates.

This act of moral equivalence making it out as if Romney was being just as nasty as Obama is proof that the Old Media is attempting to inoculate Obama for the exact sort of nasty, negative campaigning they are pretending to decry.

The fact is, Mitt Romney has run a pretty much, straight down the line, issues-based campaign. Agree or disagree with his political points, he has avoided attacks on Obama’s character and his surrogates have not engaged in a back channel, grudge match the way Obama’s have.

Just think about what Obama has done, as Ben Shapiro notes:

And this is just a small sampling of the lies and personal attacks that Obama has perpetrated against Romney and now Paul Ryan.

In return, Romney has decried Obama’s tactics, he’s criticized Obama’s campaign attacks, and expressed his desire to keep this race about the issues, but Obama has responded by a continuation of personal attacks, lies, and mud slinging.

Yet, Politico says both sides are doing the same thing.

This, I think, is an ages old left-wing concept, though. It goes right along with the idiotic, left-wing policy of “zero tolerance” we see in schools, that sort of policy where both participants in a fight are punished for the fight — as if fights just spontaneously begin and no one is the instigator. It’s as if the one who is defending himself is just as guilty as the one that picked the fight in the first place.

And that is what we see here. We see Obama cynically distracting voters with his campaign of mud slinging and lies and when Romney defends himself the Old Media tsk tsks Romney as somehow being just as bad as Obama. And what does this act of moral equivalence do? It lessens Obama’s culpability, makes of him a mere participant with everyone else instead of the instigator. In this way the Old Media makes Obama nearly blameless when in reality he is the most guilty of all.

It’s an act of moral equivalency that is, in the end, no morality at all.