One Newspaper Owner is Betting on Print 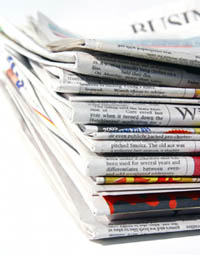 The new owner of the Orange County Register is telling his new employees that he wants to hire “more of them.” He also intends to actually expand the paper whereas the rest of the industry seems to be contracting.

New owner Aaron Kushner told a gathering of his new employees that he is, “interested in beefing up the print edition and satisfying and adding to the nearly 163,000 subscribers who pay for the newspaper daily and the 287,000 on Sunday.”

How he intends to do this when most other papers are losing subscribers in droves he did not reveal.

But, in a press release, Kushner was looking forward to the paper’s future.

“We couldn’t be more pleased with the opportunity to lead the hard-working and talented employees of Freedom Communications in serving these communities. We believe that newspapers are essential to the fabric of our lives and are excited to own and grow these unique institutions,” said Aaron Kushner, 2100 Trust’s Chief Executive Officer.

Aaron Kushner is quite new to the newspaper industry. He plied an Internet startup company into big bucks in 1999 when he sold MyMove.com — a site that allowed people to change their address via the Internet. He then invested in a greeting card business and now he is buying up newspapers.

Earlier this year Kushner failed in a bid to buy the Boston Globe. He also failed in another bid to buy the Portland Press Herald. But with his acquisition of the Register he takes on a handful of smaller papers across the country.

One of the reasons he failed in his bid to acquire the Portland paper is because the union was suspicious of his bright promises and felt he intended to slash employees and assets to achieve profitability. Of course, one of Kushner’s negotiation points was that the unions would have to throw away their contract and re-negotiate from a weaker position, so that had something to do with it, too.

As to the Orange County Register, Orange County residents might be more than a bit worried that the paper’s new owner might not reflect their local concerns. Orange County, California is one of the few Republican strongholds left in the state and Kushner is a big donor to Obama, Joe Biden, and other Democrats (as well as Maine’s ultra liberal Republican Senator, Susan Collins).

Industry insiders have hope that Kushner can employ a model that successfully revitalizes his newly acquired newspapers, but he has yet to establish a track record, so the jury is still out on the nouveau newspaper magnate.