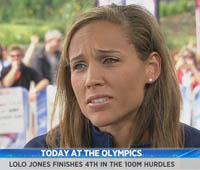 U.S. Olympic Hurdler Lolo Jones was slammed by The New York Times as a woman of little accomplishment, a flimsy girl not sufficiently woman’s libby enough, one that is all show and no go and during an August 8 appearance on NBC’s Today, the hurdler broke down in tears wondering why the U.S. media was so ready to tear competitors down instead of supporting our U.S. Olympians?

For the Times, longtime sports writer Jere Longman seemed to think that Lolo Jones’ image of beauty and grace was a strike against women’s lib. “Women have struggled for decades to be appreciated as athletes,” he said in an August 4 editorial. But Jones has gotten a lot of notice “based not on achievement but on her exotic beauty and on a sad and cynical marketing campaign,” he carped.

Essentially, Jones has decided she will be whatever anyone wants her to be — vixen, virgin, victim — to draw attention to herself and the many products she endorses.

The Times sports writer, also attacked Jones for being a committed and public Christian.

In 2009, Jones posed nude for ESPN the Magazine. This year, she appeared on the cover of Outside magazine seeming to wear a bathing suit made of nothing but strategically placed ribbon. At the same time, she has proclaimed herself to be a 30-year-old virgin and a Christian. And oh, by the way, a big fan of Tim Tebow.

Savannah Guthrie asked the hurdler what she felt after the aging, balding sports writer slammed her early this month. “I think it was crazy, just because it was two days before I competed. And then the fact that it was from a U.S. media. Like, I mean, they should be supporting our U.S. Olympic athletes, and instead they just ripped me to shreds, she replied.

Jones went on to criticize the Times for not having its facts straight about her accomplishments saying, “…they need to do their research, called me the Anna Kournikova of track…I’m the American record holder indoors…just because I don’t boast about these things, I don’t think I should be ripped apart by media…”

See Newsbusters for a full transcript of the interview.