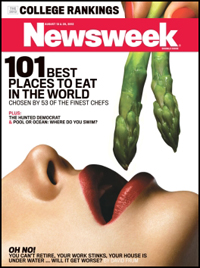 In 2010, stereo equipment magnate Sidney Harmon bought Newsweek for $1. This year his surviving family members ended their support for the magazine. It may have been a good decision since Newsweek can’t even seem to keep its own cover image fresh and original as is witness with an August cover sporting an image and theme that has been used several times before on other magazines.

The August issue of Newsweek features the cover story “101 Best Places to Eat in the World,” and is illustrated with a close up of a pretty lady, head tilted back, and with asparagus spears dangling seductively toward her red, parted lips.

If that seems familiar, you may have caught a 2008 cover of Observer Food Monthly in Great Britain that featured the exact same image. Not just a similar one, but the exact same stock photo.

Or maybe you saw the same photo on a Harper’s Bazaar cover circa 2006?

It appears the original photographer was one Donna Trope and the image can be seen on her website as the Harper’s Bazaar cover.

The asparagus may have been fresh, but the Newsweek cover was as wilted as week-old produce. No wonder the Harmon family decided that even at $1 the magazine wasn’t worth the effort.