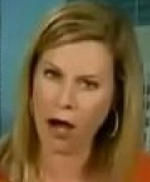 Obama flack Stephanie Cutter appeared on NBC’s Today for what she likely assumed would be a softball interview but got a few hardballs from host Matt Lauer instead when the morning talker used President Obama’s own words to slice Cutter down to size.

Cutter came on to act the attack dog for team Obama as one more flack out there trying to tear down Rep. Paul Ryan, Mitt Romney’s pick for Vice President.

Like so many of her fellows, Cutter refused to engage in any actual debate preferring instead to fearmonger, name call, and essentially lie about Ryan’s past policy proposals. But this time, NBC’s Lauer wouldn’t let Cutter just blather on without being pressed on the facts.

Lauer started the segment reminding Cutter that the President himself said that Paul Ryan was “absolutely sincere about wanting to reduce the deficit.” He went on to ask Cutter if the President still felt that Ryan was an honorable, serious Republican who sincerely wanted to offer solutions to America’s problems.

Instead of responding to the question, Cutter went into her rote attack on Ryan saying he isn’t “bold” because he didn’t “buck” his own party and that Ryan wanted to hurt the middle class by not asking “anything from the very wealthy.”

Lauer didn’t let Cutter’s blather go by unaddressed, though, and he hit her with more of the President’s own words to highlight her hypocrisy, and by extension the President’s.

Lauer: Well when you say that, Stephanie, you know, President Obama addressed Paul Ryan at a GOP retreat in 2010 and he said this, quote, “We’re not going to be able to do anything about these entitlements if what we do characterize whatever proposal’s are put out there as ‘well, you know, that’s the other party being irresponsible…the other party trying to hurt our senior citizens.'” Which sounds exactly what – like what you just said.

Cutter stammered for a few seconds unsure of what to say. Naturally when she recovered she just went right back into her rote talking points, none of which actually addressed Lauer’s points.

Kudos to Matt Lauer for throwing a few hardballs to Cutter, here.

You might remember Stephanie Cutter. It was she who lied to the nation about what she knew and when she knew about those involved in the lie-filled Obama super PAC ad that accused Mitt Romney of killing a steel worker’s wife.