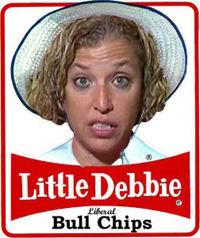 Democrat National Committee Chairwoman Debbie Wasserman Schultz said in a recent interview that she had “no idea” about the political affiliation of the super PAC that is endorsing Barack Obama. Asked if the group was a Democrat group, she feigned that she didn’t know whether or not they were Democrats despite that the front man for the group, Bill Burton, was once Obama’s White House Deputy Press Secretary.

DWS: … which we have nothing to do with it.

Host: Do you deny that they’re Democrats?

DWS: I have no idea of the political affiliation of the folks associated with that Super PAC.

Host: So, Bill Burton, who used to work in the White House, who worked for the Obama campaign in 2008? They are clearly Democrats?

DWS: That is a Super PAC ad, not affiliated with our campaign or with the party.

She doesn’t know? Come on. She has to know. She is either lying here or she really is a stupid as most people assume she is.

This sort of foolishness is what makes Debbie Wasserman Schultz a laughing stock. It also makes the Democrat Party look to be an unserious, childish gaggle of jesters. Unfortunately, she is no different than at least two of the last three Democrat Committee chairs, Howard Dean and Terry McAuliffe, neither of whom were serious people and both of whom disgorged obviously disingenuous lies every time they opened their mouths.

Advocating for something is one thing. People expect advocates to be pie-in-the-sky to some degree. But mindlessly shilling and dissembling is a whole ‘nuther animal.

It is this sort of nonsense that makes people feel that politicians are all liars and makes people want to stop paying attention to our politics. Debbie Wasserman Schultz is one of the big reasons that people don’t vote and refuse to bother with politics.