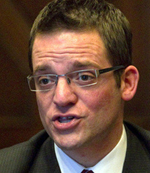 Rebel Pundit has discovered an interesting, and likely illegal, Obama campaign move in Illinois. It really does look like a Chicago alderman and the Obama campaign are breaking the law, here.

You’ll recall the little known alderman that tried to get himself some national attention by illicitly using the power of his office to deny the Chick-Fil-A company its right to its religious conviction and its right to do legal business in the city. His name is Proco “Joe” Moreno.

First of all this anti-American alderman is certainly violating the U.S. Constitution by trying to use the power of his office to attack a business that has broken no laws — not just broken no laws in Illinois, but broken no laws anywhere.

Anyway, now it looks like Moreno is illegally using his taxpayer funded aldermanic offices as a re-election campaign office for Obama.
Rebel Pundit has the details, but what has happened is that Alderman Moreno has allowed the local Obama campaign operatives to use his office as a base for the re-election campaign for the President.

This is illegal in all sorts of ways.

But it IS the Chicago way! Who cares about laws, eh? Laws are meaningless to Democrats in general, of course, but most specifically no law means anything at all to Alderman Moreno. Not local laws and not the U.S. Constitution.