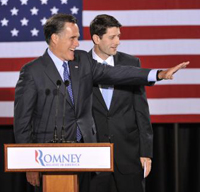 Plainly the long knives are out among the left-media already. All media hands have been called to rush out to cut Rep. Paul Ryan to pieces before he sets one foot on the campaign trail. For Buzzfeed they’ve stooped to using unnamed “sources” to attack Ryan, calling him “no Sarah Palin.” But it’s a strawman argument pushing the left’s narrative.

This Buzzfeed smear job is clearly an effort to both try and influence conservatives that love Palin to turn against Paul Ryan by invoking Palin’s name and to push the false narrative that Ryan’s pick is a “controversial” pick, one meant to shore up Romney’s “flailing campaign.” Buzzfeed is attempting to turn conservatives both against each other and against Paul Ryan.

Like John McCain four years ago, Mitt Romney hopes his running mate will shake up the electoral landscape, dramatically shift the terms of the national debate, and introduce a “game-changer” into the race, campaign advisers told BuzzFeed.

Coppins then goes on to say that unnamed “aides” have contacted him to “reject the early analysis that choosing Ryan represents a ‘Sarah Palin pick’ for Romney — a high-risk move intended to turn around a flailing campaign by elevating a polarizing politician.”

Firstly it is a flat out lie that Romney’s campaign is “flailing.”

Romney is facing a President who is personally popular with the American people, a President who represents that post-racial era that so many Americans yearn for (and so are willing to give Obama a wide margin for error to achieve), and one that still excites many voters despite his monumental failures. Yet Romney has been able to stay even or at times even surpass Obama in daily polling. And the campaign has barely even gotten to the point where most Americans will start paying attention.

To say that Romney is “flailing” is a misstatement of the current situation. Romney may not be convincingly ahead, but he’s hardly “flailing.”

Secondly, it was pretty sly of Buzzfeed to introduce a strawman argument just to knock it down with a few unnamed “aides.”

Notice that Bizzfeed does not identify anyone on the GOP side of the aisle who is actually saying that Romney’s pick of Ryan is a “high-risk move intended to turn around a flailing campaign by elevating a polarizing politician.”

In fact, it is the left’s theme that Ryan is “controversial,” not anyone’s on the GOP side.

In this piece Buzzfeed pushed the false narrative that Ryan is “controversial” then forced unnamed “aides” and a few campaign spokesmen to deny the charge. This is the type of faux reporting we get from the left all the time: float a lie then make Republicans deny the essence of the lie. Remember “false but accurate”?

Buzzfeed obviously wrote this piece with the re-election of Barack Obama in mind.