The owner of Krause’s Deli in Cincinnati, Ohio is extremely upset with Barack Obama for showing the front of her business in one of his TV commercials. It is causing her to lose customers and she says she was lied to when the video of her shop was taken. Now she wants the video removed from Obama’s TV spot. 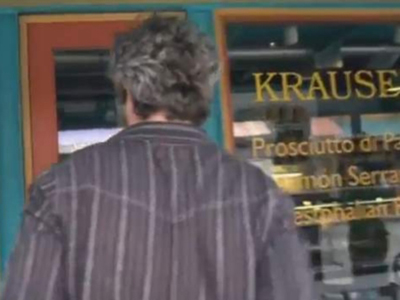 Krause’s Deli as it appears in the Obama ad

Debra Krause-McDonnell, owner and operator of Krause’s Deli, tells the Cincinnati Enquirer that she is most upset because she was not told that the video crew that appeared before her shop one morning earlier this year was filming for an Obama ad. Not only that but she says they lied saying they were filming for a business security gate company.

The small business owner told the media that after the ad began running in the Queen City some of her customers had told her they will no longer shop at her establishment because she has taken sides with Obama. If she had done this, though, she would likely be prepared to accept the consequences over her support for Obama. But the fact is she has not chosen sides.

“I’ve been put into a position I didn’t ask for,” she said Wednesday after the Hamilton County Republican Party sent out an email about the ad that accused Democrats of not responding to the owner’s concerns. “I’m a little angry.”

Krause-McDonnell isn’t just a partisan on this, either. She told the Cincy paper that she would be just as upset if her deli appeared in a Romney ad especially since she was not aware that the video being taken was going to end up in a political campaign ad.

A Cincinnati Democrat Party operative countered saying that the Obama campaign purchased the video from a stock film company in town and did not feel it necessary to contact the business owner for her permission to appear in the ad.

Naturally the Democrat operative is claiming that Krause-McDonnell is just a Romney supporter looking to play politics with the incident.

Whatever the case, politics are highly charged these days, we all know. Because of this one would think that it would be a good idea for politicians to contact businesses that appear in their campaign ads just to make sure the business agrees to be in the ad. Wouldn’t you think?