Yes, ObamacareTax IS the Biggest Tax in American History

Lefties everywhere have hastened to try and absolve the ObamacareTax claiming that it really isn’t the largest tax in American history despite that conservatives say it is. What is their proof? Well, as a percentage of GDP ObamacareTax is smaller than other taxes we’ve instituted in the past. This, statistic, though, is quite misleading.

LoudTalkerBlog has crunched the numbers, but the chief take away is in this chart, and, yes, it is the largest in total cost ever: 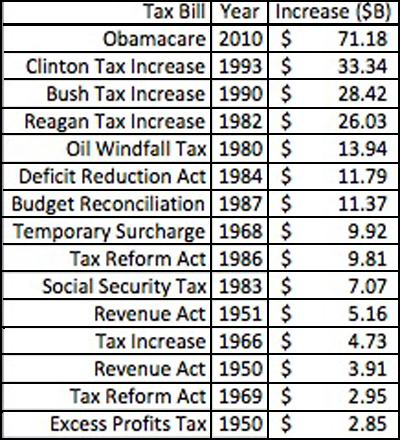 Talker goes on to detail why the ObamacareTax is the biggest ever.

But, if you look at the raw dollars of the deal, again using Drum’s numbers, the cost of Obamacare is $71.18 billion dollars. (0.49% x 2010 GDP of $14.526B). That would make it the largest tax increase ever. The second highest dollar amount in the list? Clinton’s 1993 tax increase of $33.34 billion, which is less than half of the Obama tax increase. Third would be GHW Bush and fourth Reagan.

Worse, those lefties that are claiming it isn’t the biggest tax ever are leaving out all sorts of aspects to ObamacareTax in order to make its impact smaller.

In other words, they lie.