Savannah Guthrie Replacing Ann Curry on TODAY, What Can We Expect? 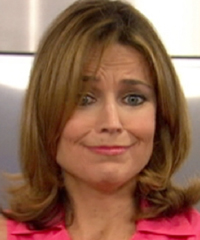 Media watchers are announcing that Savannah Guthrie has been tapped to replace the departed Ann Curry on NBC’s long-running morning show, Today. So, what can we say of Guthrie? What has she done before to prepare us for her role at Today?

Will Guthrie be that long-awaited “unbiased” denizen of NBC, the one that will bring credibility to Today? My Magic 8 Ball reads Don’t count on it.

In fact, Guthrie has already been called out over the years by media watchers for biased interviews and comments. Here are just a few of them.

Only just this week, Guthrie was heard to gush over Supreme Court Chief Justice Roberts’ decision to Okay Obamacare by happily noting that he cares more about the Court’s “credibility” than he does questions of the Constitution. She also ascribed the wisdom of Solomon to him calling his opinion a “Solomonic decision.”

But, let’s harken back to the early GOP primary campaign when leading figure Jon “1%” Huntsman was continually pushed by the media as the perfect GOP candidate despite that he could never actually get any GOP votes. Last Sept., in an interview with Mr. Moderate, Guthrie decided to help him tip in his mushy middle bona fides by asking Hunstsman this leading and assuredly unbiased question:

“Do you think that Governor Perry or Michele Bachmann are too far right to win and beat President Obama?”

Guthrie also slammed Santorum in February for trying to “reignite culture wars in America” after Santorum noted that Obama’s ideology was a “phony theology of liberalism.”

In fact, slamming Rick Santorum became a favorite theme of Guthrie’s as she did so multiple times during his run for the GOP nomination.

Speaking of trying to play “gotcha” journalism with a GOP presidential candidate, in April, the NBC journalist tried to “get” Donald Trump on the abortion issue. Her attempt was clumsy and misinformed.

Last year, Guthrie even hosted a Today show panel pondering the important question on whether Governor Chris Christie was too fat to be a successful president?

Now, remember, Guthrie was the reporter that insisted that there was no “organized bias” in the media.

In a 2010 Guthrie did an interview about being a White House correspondent. In that interview she admitted there is bias in the Old Media, but still assured us all that it wasn’t pervasive.

“I know that I and most of my colleagues work pretty hard to just play it straight and, we may not always succeed but, in terms of some organized bias, that I don’t buy,” she said.

In May of 2011 she seemed to reverse that claim, though, by admitting that, at least on the issue of gay marriage, the Old Media are hopelessly biased to the left on the issue.

Apparently Guthrie is also no fan of Christianity. In April of 2012, Guthrie presided over a one-sided report that attacked the Catholic Church over an employee’s fertility issue, a report during which no representative of the church was asked to participate.

Guthrie doesn’t just slam Christians and Republicans, though. She also plays flack for Democrats. In November, Guthrie gave Massachusetts Congressman Barney Frank a complete pass on his role in the financial crisis by somehow forgetting to mention he was one of the architects of the rules that caused the whole thing.

There are, of course, dozens of other examples of Guthrie’s less than balanced coverage of current events, but this will serve to get a flavor of her “pretty hard” attempt “to just play it straight.”

Welcome to Today Savannah Guthrie. Next verse, just like the first.