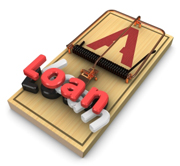 In its update on the coming student loan interest rate hike deal in Congress, Politico dances its blame-the-GOP tap dance once again saying that the coming rate hike is all just “politics.” But somehow Politico forgets to note that this interest rate problem is of the Democrats’ own making in the first place.

Reporting that Congress has signed off on a bipartisan deal to halt the scheduled interest rate increase on millions of student loans, Politico takes a paragraph to “explain” what the hold up was.

Lawmakers moved quickly on Friday to end a legislative dispute that got caught up in politics on Capitol Hill and on the campaign trail, as Obama repeatedly blamed Congress for delaying and Republicans accused the president of being AWOL in negotiations.

Yes, those darned old Republicans were just engaging in “politics.”

But, wouldn’t it have been nice for Politico to note why we got here with this student loan interest rate fiasco?

The fact is the low rate of 3.4 percent, where many student loans now stand, is at that low interest rate because Democrats under Pelosi and then Obama kept, year after year, needlessly lowering it when Democrats ran the House.

Of course there is “politics” being played on the student loan rate issue. The fact is that the new interest rate hike of 6.8 percent was set way back in 2002. But it was the “politics” of Democrats being played since 2007, not just Republicans in 2012, that brought us here.

As it happens, in 2007 Congress wanted the interest rate lowed to 6 percent and so they did. Then in 2008 they lowered it to 5.6 percent. In 2009 it was lowered to 4.5 percent. And finally in 2011 to 3.4 percent. But the whole time everyone knew that the 6.5 percent hike was a law passed years before and that it would hit in 2012. Sadly, if the rates had not been so continually lowered year by year, this issue would not be the big shock that it now is.

Still, it is good that Politico noted the Republican’s complaint that Obama has been AWOL on negotiating. But Obama has made a standard practice out of being AWOL on practically every issue that faces Congress. Obama feels his job is to speak a few soothing words from his tele prompter and then to go play golf. He has rarely engaged lawmakers on any issue — be they Democrat or Republican.

Lastly, there is a big problem with extremely low student loan interest rates that Politico also did not discuss. Low rates naturally encourage more borrowing than is economically supportable.

Low rates will cause more people to borrow to go to college using that cheap money. This gives colleges and universities the false sense that they can raise tuition because they have lots of new students. This also encourages students with lower grade averages to go to college when they may not have if rates were higher. Ultimately, all this disgorges graduates into the labor market, students who become underemployed measured by the degrees they didn’t need or stay unemployed because they cannot make use of their degrees.

It’s a pretty unsustainable education bubble that when it bursts will cause far more problems than a 6.5 percent loan rate!

Cheap student loans are not a good idea. But Politico just wants you to know that those mean Republicans are just trying to use “politics” against that nice President Obama, just the same.