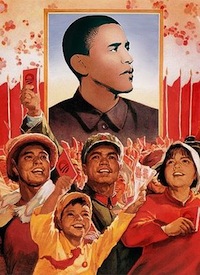 While Obama tries to get America focused on the false claim that Romney outsourced jobs as the chief of Bain Capitol, what was the President doing? Why, outsourcing his fundraising, of course. Outsourcing it to Shanghai, China to be precise.

On July 11, Obama’s big money men were holding a nice fundraiser in Red China for the President. It headed up by Technology for Obama co-chairman Robert Roche, who has committed to raising $500,000 for Obama.

Here is the fundraising webpage for the Shanghai event.

Does that seem a bit hypocritical? Attacking Romney not only for supposedly outsourcing jobs overseas, but also attacking him for having investments outside the U.S., yet here Obama is sponsoring fund raisers in China, of all places?

But it isn’t just China. Obama is also plying donors with U.S. citizenship in the UK and France.

Lots of outsourcing going on, there, pal.

Finally, can I just say one thing, here? Is team Obama so stupid that they don’t know the term for pushing jobs overseas is offshoring, not “outsourcing.”

Doug Ross has done a screen shot of the fundraiser in case it gets removed by team Obama.