Obama Eager To Sign Away Our Second Amendment Rights to U.N. 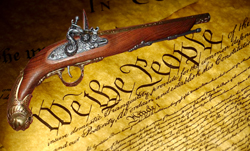 Another odious United Nations treaty may soon come before President Obama and he’s reportedly quite eager to sign onto this one because it may result in the end of our Constitutional Second Amendment rights. It may also turn over to the U.N. the control of the manufacture of all weapons and weapons related items, even hunting arms and related merchandise.

This treaty, the U. N. Arms Trade Treaty (ATT), could be finalized sometime this month and critics say it presents many dangers to American sovereignty, foreign policy, and safety, not to mention our Second Amendment rights.

The scope of this treaty is quite broad, covering items as small as rifle scopes all the way to such huge items as battleships and instruments of the major power’s war machines. It not only covers the final manufactured weapons and weapons-related merchandise, it also covers the technology and means for their production. This treaty seems intended to place in U.N. hands every last thing related to any kind of weapon, regardless of its use. This includes hunting weapons. 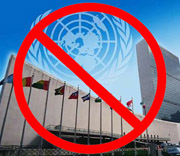 U.S. authorities have tried to assuage American’s fears by telling us, for instance, that the ATT will exclude hunting weapons. But this is quite unlikely as most of the countries involved in negotiations are against excluding such weapons.

Still Obama administration officials say fears are over blown. Acting Under Secretary of State for Arms Control and International Security Rose Gottemoeller recently took to her Twitter account to try to make Americans feel better about the treaty by assuring us all that it “will not in any way handicap the legitimate right of self-defense.”

Secretary of State Clinton has expressed her hearty support of this treaty and maintains that the ATT only pertains to international trade and trafficking in weapons. But Investor’s Business Daily raises a key question by wondering how the treaty might deal with something like Fast & Furious?

IBD also points out that it is a bit hard to believe Obama’s reassurances that this treaty is benign since his administration doesn’t seem to be above using government resources in stealth efforts at gun control, as Fast & Furious appears to prove.

Other politicians are not so sure that the ATT is so benign. A recent letter by 130 lawmakers to President Obama objects to the U.S. signing onto the thing. The letter, sponsored by Representative Mike Kelly (R, PA), says that past U.N. actions indicate that the ATT “is likely to pose significant threats to our national security, foreign policy, and economic interests as well as our constitutional rights.”

Unsurprisingly, the National Rifle Association is not a fan of this treaty, either.

For many years, international anti-gun groups have attempted to make the ATT a vehicle for numerous gun-control schemes. Among other things, proposals have been made for the treaty to impose stringent registration requirements, gun bans, and the tracking of ammunition, along with mandating new permits for traveling international hunters and sport shooters, and the creation of a U.N. gun control bureaucracy. The U.N. has denied that the ATT will affect domestic gun ownership, but its latest pre-conference position paper (“The Impact of Poorly Regulated Arms Transfers on the Work of the U.N.”) calls for exactly that.

Finally, the Heritage Foundation has pronounced this a flawed treaty saying that said flaws far outweigh any benefits.

Any treaty that hands over regulations for the manufacturing of legal American firearms and related merchandise as well as the ownership and use of firearms would naturally seem to be a threat to our Constitutional rights quite regardless of the bland reassurances of ATT supporters. Sadly, Obama has a long pre-White House history of opposing the Second Amendment, so it isn’t surprising that he’s itching to sign onto this treaty.