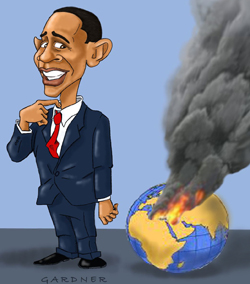 President Obama’s reelection team held a conference call recently. The call was meant as an attack on Mitt Romney’s trip abroad, a trip meant to burnish his foreign policy creds. But one thing that team Obama seemed to want to ignore was Obama’s own foreign policy failures in Syria. And so the civil war in that far away lands was practically ignored by Obama’s advisers.

In fact, Obama’s entire policy on Syria seems to have at the very least become stalled. It is likely he’s putting off any further decisions until after the election in order to appease his anti-war left wing supporters. But whatever the case, he is failing to lead in Syria.

There may soon come a very dangerous tipping point in Syria, too.

This week it was reported by some sources that Bashar al-Assad’s Syrian forces have chemical weapons and may be prepared to use them against rebels. Obama has done little of note about this threat.

Sadly, the rebels have been pleading for better weapons from the U.S. but despite Obama’s pledge of his support for them, he has ignored their pleas.

As to the conference call, the only mention of the situation in Syria was when Colin Kahl, former deputy assistant secretary of Defense for the Middle East, said simply that, “the Assad regime appears to be losing control.” That was all.

The Washington Free Beacon notes that the President is coming under fire for his failures in Syria.

“Their main goal has appeared to be kicking it down the road until after the U.S. election, rather than helping the rebels remove the Assad regime,” Abrams said. “Of course they don’t want to talk about it much, because they can’t really explain why it was in the interest of the United States to stand back, watch the bloodshed rise, and do nothing but make speeches.”

Other watchers of Middle East policy feel that Obama’s administration is so muddled that it cannot even arrive at a concrete policy, instead just drifting from incident to incident without direction. This, one senior policy adviser said, is why Obama is avoiding any talk about Syria.

“The Obama campaign strategically wants to avoid any discussion of Syria because it’s one of the most striking failures of this administration,” explained one senior foreign policy adviser on Capitol Hill.

“There’s as much blood on this administration’s hands as on Russia’s hands,” said the source, referring to Russia’s repeated attempts to block action on Syria. “After more than a year of murder in the streets and crimes against humanity, they’ve done nothing to stop that violence.”

Whenever you ask a liberal about Obama’s successes in foreign policy, they quixotically point to Obama’s ramping up of the drone program and how it has “gutted” al Qaeda. It’s quixotic, of course, because it is the exact program that they hated Bush for.

But, still, that is a singular success and it doesn’t seem to be one tied to a greater foreign policy schema. Other than the drone war on al Qaeda, Obama doesn’t seem to have any concerted foreign policy. He’s hit or miss, all over the map. There is no Obama doctrine. This man is not a leader, he’s pushed and buffeted by events.

Thus far Obama has squandered America’s position of leadership on the world stage. He’s stepped back and allowed other nations to take the lead. Worse, he’s also stepped back from supporting those yearning to be free.