NY City Council Speaker Stands Up Against Freedom of Speech 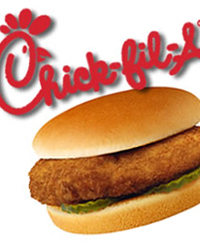 Judging by this whole Chick-Fil-A oppression program liberals are engaging in, it’s no wonder Jonah Goldberg had a hit with his recent book, Liberal Fascism.

This time it is City Council Speaker Christine Quinn who is proud to stand against our Constitutional rights of freedom of speech and freedom of religion, not to mention the right to do legal business anywhere without fearing the iron boot heel of government coming down upon us for having upset some haughty government official somewhere.

Quinn has condemned Chick-Fil-A for having dared to break no laws in the exercise of its daily business and is sponsoring one of those wondrous Internet petitions saying so.

If a petition were to be where her ire ended, well, that would be her right as a private citizen, as far as that goes. But she’s taken that step farther which makes her actions illegal. Quinn’s invoked her powers as an elected official and sent a letter to New York University’s president demanding that the Chick-Fil-A outlet on his campus be shut down.

Writing “as the Speaker of the NYC Council,” Quinn’s letter contains at least one veiled threat and one overt one — the latter clearly being un-American and un-Constitutional. The letter reads in part…

Let me be clear — I do not want establishments in my city that hold such discriminatory views. We are a city that believes our diversity is our greatest strength and we will fight anything and anyone that runs counter to that

I know from our long relationship that you and your university celebrate the diversity of NYC. Your history in this area is exemplary.

As such I urge you to sever your relationship with the Chick-Fil-A establishment that exists on your campus. This establishment should be replaced with an establishment where the ownership does not denigrate a portion of our population.

First of all, this gobbledegook that “diversity is our greatest strength” is absolute, feels-goodism at its worst. It is a rote saying that has no meaning. But that’s a quibble compared with the authoritarian threat and the veiled threat contained in this screed.

Then there is this “my city,” stuff. You, my dear, are an elected official. New York is not “yours.” It is the collective ours, not the autocratic yours. After all, there are millions of New Yorkers, who agree with the owners of Chick-Fil-A about gay marriage. Are you saying those voters have no right to live in “your city”?

The veiled threat is in the second paragraph above. Note that Quinn’s implied threat is that if the university doesn’t agree with her that Chick-Fil A is the worst company ever, then the university will no longer have that “exemplary” love of diversity record.

And then there is the overt and un-Constitutional threat. Quinn’s use of her power as an elected official to oppress a business that has neither broken any laws nor been accused of breaking any laws anywhere in the country, but one whose owners have certain (and inalienable) religious ideas, is unconscionable.

This letter gets even worse. At its end the Speaker tells the university to not only close down Chick-Fil-A but force the next fast food outlet that opens in that space to hire the same people that worked for Chick-Fil-A.

…I also urge you to keep the workers who are employed by Chick-Fil-A and ensure that the replacement restaurant lets them retain their jobs.

That’s right, this dictator thinks she can tell the next business who they must hire for having the privilege of taking Chick-Fil-A’s spot on the campus!

Quinn has just pronounced Christianity a hate crime. How long will it be before some politician somewhere tries to make this pronouncement a matter of law?