Ice-T: Guns the 'Last Form of Defense Against Tyranny' 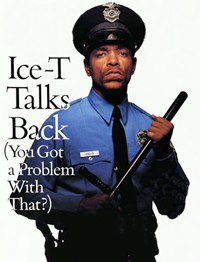 I’ve always wondered how the African American community could possibly support strict gun control considering its past history with government authorities both in our past and modern times. Well, at least one prominent African American, rapper and actor Ice-T, is speaking out in favor of American’s Second Amendment rights.

In a visit to sell his latest film project, Ice-T appeared on Channel 4 TV in London, England with host Krishnan Guru-Murthy. The appearance just happened to be only hours after the mass murder in Aurora, Colorado and host
Guru-Murthy thought he’d query the rapper on his thoughts on guns in America.

As it happens, Ice-T, the self-described “Godfather of Gangsta Rap,” was not in the least apologetic for American’s rights to self defense.

Ice-T: Well, I’ll give up my gun when everyone else does. Doesn’t that make sense? I mean, if there were guns here would you want to be the only person without one?

Krishnan Guru-Murthy: So, do you carry guns routinely?

Ice-T: Yeah, it’s legal in the United States. It’s part of our Constitution. You know, the right to bear arms is because that’s the last form of defense against tyranny. Not to hunt. It’s to protect yourself from the police.

Guru-Murthy: And do you see any link between that and this sort of instance?”

Ice-T: No. Nah, not really. You know what I’m saying, if somebody wants to kill people well you know they don’t need a gun to do it.

Guru-Murthy: Makes it easier though, doesn’t it?

Ice-T: Not really. You can use, ah, you can strap explosives on your body. They do that all the time.

Guru-Murthy: So when there’s the inevitable backlash of the anti-gun lobby as a result of this incident as there always is…

Ice-T: Well, that’s not going to change anything in the United States, no. United States is based on guns. Like KRS says, you’ll never have justice on stolen land.

As I said, it should rather be surprising if a an American black man would be against the Second Amendment due to the often troubled history that African Americans have had with violations of their freedoms not only by private individuals, but also at the hands of government authorities.

What group who endured the Rosewood massacre in 1923 could today feel their Second Amendment rights are unimportant? The Rosewood Massacre was an incident where enflamed whites from nearby communities shot and killed six blacks in a small Florida town and where the black community only prevented more deaths because they armed themselves.

Then there is the story of Robert Franklin Williams who in the 1950s helped arm his own community against the depredations of marauding members of the Ku Klux Klan in Monroe, North Carolina.

And this is all not to mention slavery, Jim Crow, and the more modern troubles that American blacks have had with police — whether real or imagined.

So, to have African Americans fighting against their right to self-protection, well, it just seems absurd.

Fortunately, here we have one prominent African American standing up for his rights and properly noting that the main reason the Second Amendment was created by our founding fathers was to prevent government from becoming a tyranny on the people.

Ice-T wasn’t the only rapper to come to the defense of the Second Amendment. In the wake of the incident in Colorado, Big Boi of OUTKAST also announced his support of the freedom to bear arms.