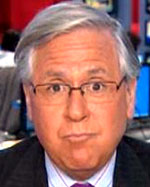 On a July 23 appearance on MSNBC’s Hardball with Chris Matthews, Huffington Post Editorial Director and former Newsweek Editor Howard Fineman accused Mitt Romney of pandering to a “xenophobic” Republican Party, a racist party, he said, that is “afraid of the world.”

During a discussion of Michele Bachmann’s questions about Hillary Clinton aid Huma Abedin’s possible familial ties to the Muslim Brotherhood, host Chris Matthews asked the left-wing HuffPo editor why Mitt Romney doesn’t “have the guts” to stand up to those in his own party. In reply, Fineman slammed Romney and the “nativist” GOP.

“Well, that would require Mitt Romney to run an entirely different campaign from the one he’s run so far. And he’s not going to do it. He is playing to- and has from the beginning of the campaign- played to the kind of nativist base of the Tea Party. And by nativist, I mean people who are, in essence, afraid of the world.”

Fineman went on to attack the GOP as racist saying the party should “quit being xenophobes” and that, “there’s a question about the Republican Party’s identity.”

Naturally, one strains to remember when any Democrat was asked to “have the guts” to stand up to the left-wing of his party. Only Republicans seem to ever face calls to confront his own side.

See Newsbusters for the full transcript.